Love can arrive anywhere. It breaks through calcified pain and loneliness, and it will nourish our souls when we recognize its many forms. Love will heal us, love will show us the way through, and in the end, it’s true–love is all you need.

Let me be clear from the start: Simon Van Booy has written an extraordinary novel. Everything Beautiful Began After is both a stolen kiss and the aching memory of the best stolen kisses. It is about adoration, grief and–my number one literary wheelhouse–the chronically lonely. If there is one book published this year that you read, let it be this. “To love again,” he writes,  “you must not discard what has happened to you, but take from it the strength you’ll need to carry on.”

For the lost souls of the world, Athens is a place not to find themselves, but to find others like them.

In Athens, you will never age.

Time is viewed in terms of what has been, not what is to come.

Everything has already happened and cannot happen again. 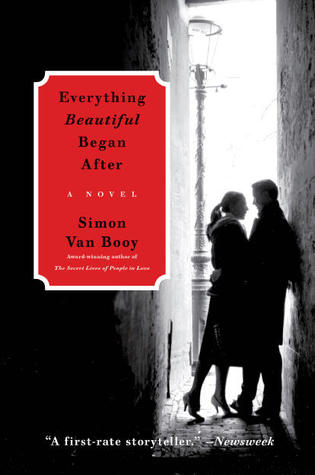 Rebecca has arrived in Athens from France, carrying her art supplies and the desire to reemerge as a stronger person. Abandoned by her mother as a child, she and her twin sister were raised by their grandfather before she spent two years working for Air France. After taking a yearlong break back at her grandfather’s cottage to collect herself, she decided to “live in exile with her desires.” With her move, she could finally feel whole.

Not long later, she meets George, an American in love with ancient languages and who is prone to excessive drinking. “His voice was slow, and his mouth held onto the words for as long as they could.” They fall into an easy, affectionate friendship. They eat supper together and have long, late night conversations. George, so shy and awkward, falls in love. But:

Her body did not change when George was close. She did not feel the calm violence of attraction she had felt with the Dutch pilot in Moscow. That was something outside themselves, something to which they had mutually conceded–like a particular hunger, brought on and satisfied only by one another. Rebecca did not feel that visceral intensity with George, but his arm on her shoulders made her feel safe.

God, I love that phrase, “the calm violence of attraction.” Is there any better, more succinct way to describe it? Van Booy’s writing is filled with so many beautiful truisms that I could spend much of this review listing them, and having little offer in commentary apart from, “Yes. That.”

What marks the difference between affection and full-blown enamoring clear to Rebecca is how she feels when she meets Henry, a young archeologist studying Athenian ruins with a longtime professor friend. They meet each other at an outdoor market, reaching for the same rare, uncut Colette first edition. He buys the book, but gives it to her.

When Henry took her hand and led her through the marketplace, she not only let him take it–but held on. He was certainly handsome, but for her it was more, as though in every moment, in every word and gesture she found herself thrilled–as though a spell had been cast and his mere presence filled her with an unimaginable happiness that was without reason or condition.

Each person comes from their own personal tragedy, and each reaches towards the unknowable future with a mixture of hope and resignation. Rebecca, George, and Henry’s lives overlap in a wonderful, though heartbreaking way–a way in which I cannot specify further for fear of spoiling the story.

Van Booy does interesting things with point of view and writing style, shifting to second person present about halfway in, and the intimacy afforded by it is lovely. A less talented writer would not be able to handle the transition so well, but here, the way in which he lays the words on the page feels absolutely necessary.

Sometimes you carry out a bowl of coffee in both hands and sit very quietly. Sitting there makes you feel good. Your lips see themselves approaching the reflection of the coffee. You find steam beautiful.

When I reviewed Van Booy’s edited collection Why We Need Love, I said, “All love is true; it’s only the varieties that change.” I stand by that, and this book is an excellent example of that sentiment. Ask me why I love you, and my answer will be sincere and no less valid than the answer I give another.

The same is true for pain. No pain is invalid, and grief cannot be quantified and arranged into a tidy hierarchy. If there is anything we should afford our fellow human beings is that our feelings are personal, and while we are free to share them as we like, we do not need permission from others to experience them.

People at work will see a shy young man of about thirty.

Someone will have a secret crush on you.

Nobody will know that you’re really a broken old man, a ruined man with a sadness so deep it’s like unbreakable strength. And when someone comes to you with bad news–their grandparent, an aunt with cancer, a cousin suddenly one morning in a car–you’ll have to pretend any reaction beyond indifference.

The deep fog of our feelings, both positive and negative, will always impact our approach to the everyday. This is not an argument to say that every feeling is healthy or beneficial, but sometimes… Sometimes we should allow ourselves to just be, to swim in that great chasm of love and heartbreak, and the rib-shaking power of our connection to the world. Everything Beautiful Began After welcomes this state of existence and explores it in such an honest way that I’m still thinking about the book, weeks after reading it. The best literature, the best art in general, makes us more present, but also more reflective. The best teaches us compassion, not only for others, but for ourselves. We can treat ourselves better, and we can love better and more, and we can keep on heading towards that next perfect moment.

He reached for her hand in the darkness and together they fell from this world and into another.

Full disclosure: Harper Perennial sent me this book. I thank them for the gesture, and I will continue to be fair in my reviews. This review originally appeared on Glorified Love Letters.

7 thoughts on “Book Review: Everything Beautiful Began After by Simon Van Booy”