I’ve been sitting here for an hour trying to figure out how to begin writing about fashion and style in the Harry Potter films. I considered beginning with Hermione Granger – with a frizzy bushel of hair with an attitude to match, she’s more famous for spell-casting and Weasley-wrangling than anything sartorial. In fact, Hermione is utterly outdone by her off-screen counterpart Emma Watson, and the consistently pitch-perfect ensembles I’ve admired over the past decade. In the films, when not in Hogwarts school uniform, Hermione is dressed simply and casually. For one such as myself, who takes great enjoyment in costume design, the fact that Hermione’s outfits (as well as those belonging to Ron and Harry) could have been pulled directly from any average teenager’s closet was something of a disappointment. Though Hermione was raised by Muggle parents, she enters the wizarding world wholeheartedly, and it is known that in J.K. Rowling’s novels, the wizarding world maintained a decidedly eccentric understanding of clothing in general, particularly Muggle clothing. But it is easy to see why the producers chose an angle that encourages young audiences to see more of themselves in the three heroes of the films. More to the point, I can hardly blame Ron, Harry, and Hermione for choices made by Jany Temime, costume designer from Prisoner of Azkaban through to the final installment of the Deathly Hallows.

Most recently, Deathly Hallows Part 1 has come under scrutiny by members of the fashion industry for the dress worn by Fleur Delacour at her wedding to Bill Weasley, featured in early scenes of the film. To put it bluntly: Jany Temime made a blatant copy of a gown from Alexander McQueen’s FW08 collection, and when discussing her inspiration for the dress in subsequent interviews, blithely failed to mention McQueen’s name at all (though she waxed poetic about love and rebirth). This incident was most disappointing to me not because Temime attempted to plagiarize the late genius’ designs, blasphemous as it was, but because it put the kibosh on any hopes I may still have had for a surprise, eleventh-hour switch from safe to spectacular.

The first time I suspected that the costume designs wouldn’t necessarily match the success met by other facets of the films (cinematography and art direction, for example) was in the much-anticipated Yule Ball scene from Goblet of Fire. Temime’s design for Hermione’s big reveal (in the books this is an important scene for the character her development) was perhaps the most egregious example of Temime’s utter lack of style. A garish, frilly monstrosity in a lurid cotton-candy pink, it succeeded only because Emma Watson wore it with such calm, confident elegance (not to mention, it would have been difficult to look bad next to Ron’s hand-me-down dress robes!). In my opinion, Harry himself was the standout star of the scene; it is this outfit, and others like it, through which Temime’s designs truly shine. Her strengths seem to lie in the understated, in the details which make the wizarding world seem so exceptionally realistic and natural. This is most strongly showcased by the professional wizard characters: Albus Dumbledore, Minerva McGonagall, and Sybil Trelawney, to name a few. Temime seems to have taken cue from real-world professional garb and amplified them with “wizarding” details. The way Harry’s Yule Ball outfit transitions seamlessly from formal tuxedo to Oxford-style academic gown, aided by the subtle Victorian-era notes visible throughout the films, is a perfect example of this talent.

I do confess, furthermore, that there are a few characters who Jany Temime seems to have been born to design for, particularly Rita Skeeter and Dolores Umbridge. Through them, Temime’s garish tendencies were 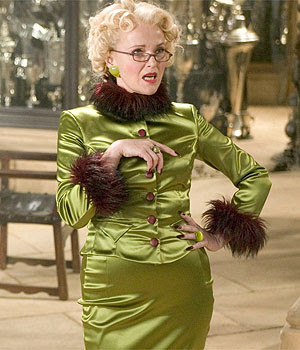 The resulting glitzy sleaziness from Skeeter and cutesy menace from Umbridge brought the characters into fantastic relief.

Paragraphs later, costumes examined, and I am still unsure as to how I wish to characterize my ultimate opinion of the Harry Potter films and their costumes as designed by Jany Temime. From a fashion standpoint they offer little in terms of everyday inspiration – something I look forward to in most movies where costumes play an important role. I must allow, however, that they are a great complement to the tone of the films, and take a measured account of audience expectation – important features in any commercial work.