I don’t bake. Baking involves following precise instructions, taking careful measurements and distinguishing between things like baking soda and baking powder, none of which is easy to do after my customary four or five glasses of wine while cooking. So I’m always looking for good, easy recipes to add to my files under “dessert” (known also in my house as “breakfast”). This recipe appealed to me because it essentially calls for taking several ingredients that you might find lying around during the holidays, dumping them in a bowl and baking them.

Bread pudding is one of my favorite desserts to make because it’s astoundingly simple and still manages to give off the illusion of being fancy. It’s the BeyoncÃ© of desserts. To prove how simple this recipe is I decided to stay out far too late at a karaoke bar and come home to make it at 3 AM after several sakÃ© bombs The foundation of a good bread pudding, unsurprisingly, is good bread. This is the only thing you have to prepare in advance. And by prepare in advance I mean leave-out-on-the-counter-overnight, which if you’re anything like me you’re prone to do anyway. Most recipes will call for baguette, but you can really use just about any type of white bread. If you use something soft like brioche or croissant it’s usually good to mix it with a firmer bread like challah, Texas toast or raisin bread. If you used canned pumpkin purÃ©e in this recipe (which is what it calls for) you can literally prepare the custard in five minutes. But if you have an electric mixer or a food processor and feel like getting authentic, pumpkin puree is really very easy to make. I had a couple small pie pumpkins hanging around from Halloween so I decided to give it a shot.

Step 1: Find a roasting pan.
I didn’t have one but I did find a few deep Pyrex baking dishes.

Step 2: Sacrifice the pumpkin.
I cut my pumpkin in quarters – after thanking it for being a noble pumpkin and apologizing for what I was about to do ““ so it would fit in the baking dish.

Step 3: Bake.
After scooping out the seeds I placed the pieces flesh down in the baking dish in about 2 inches of water and put them in the oven for 45 minutes on 350 degrees. I may or may not have taken a nap during this time. 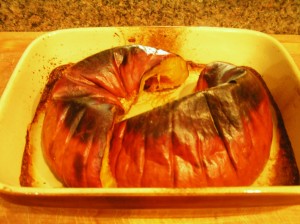 Once the pumpkin is baked it can be scooped out of the rind with a spoon as easily as an avocado and put in the bowl of a food processor. Process until smooth or about 2 minutes ““ this is the amount of time it takes to pour yourself a tall glass of water and regret the events of the previous evening. 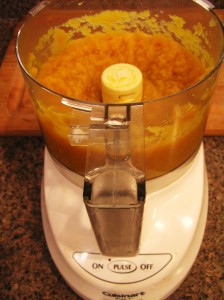 A 4 lb. pumpkin will yield about 4 cups of puree; this recipe only calls for ¾ cup of pumpkin puree. The rest can be frozen and used for up to six months. If you have a baby, congratulations, you now also have baby food. Next comes the magic, which consist of combining the pumpkin puree with the other non-bread ingredients in a large bowl to make custard. Note that this recipe calls for “high quality eggnog”. In my house nothing says high quality quite like Southern Comfort but presumably the richer and tastier your eggnog, the richer and tastier your custard. And speaking of booze, keep in mind that it isn’t necessary to limit yourself to rum. While a spiced rum like Captain Morgan’s will compliment the flavors in this dish nicely, so will various other liqueurs. I used Grand Marnier to give it a little hint of orange, which I thought would go nicely with the cranberry*.

[*Tart cranberries pair awesomely with this very rich, sweet dish, which is handy since there is almost always extra cranberry sauce hanging around after Thanksgiving. While I have included a recipe for spiced cranberry compote below, sometime around 5 AM that all sounded a bit too complicated (it’s not really). Instead I stuck with my patented dump-in-a-bowl method and dumped half a bag of cranberries I found conveniently hiding in my freezer from last Thanksgiving into the custard. As it turns out this was a fairly brilliant move!] 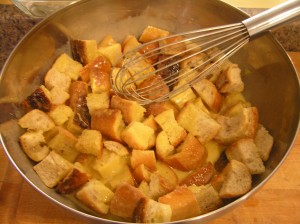 Last, add the bread chunks to the custard and let them bob happily in boozy custard for a while – until they’re well soaked like French Toast – before putting it in the oven to bake!

Step 1: Dump all ingredients except bread in a bowl. Mix.

Step 3: Dump everything into a baking dish. Bake. My reward for this experiment, dear readers, was warm baked, goodness (with a little hair of the dog) to go with my coffee and hangover this morning. In that moment I assure you there was no better dish in the world.

1. Put the bread cubes in a large bowl and drizzle with melted butter

2. In another bowl, whisk together the pumpkin, sugar, egg yolks, eggs, eggnog, nutmeg and rum until well combined. Pour the egg mixture over the bread cubes and stir gently. Let the mixture sit for at least 30 minutes, poking the bread down into the egg mixture often and stirring it up every 10 minutes or so.

4. Transfer the bread pudding mixture to a 7-by-11-inch or 9-inch square glass baking pan. Bake for 40-45 minutes, or until the center is just set and a knife inserted in the center comes out clean.

In a small heavy-bottomed saucepan combine the cranberries, nutmeg, cinnamon, sugar, orange juice and zest. Bring to a simmer over medium-high heat then reduce heat to medium. Let cook until cranberries are popped and mixture is a nice compote consistency, about 4 to 6 minutes. Let cool completely before serving.

Note: You can put booze in this too!

One reply on “Pumpkin Eggnog Bread Pudding: A Holiday Dish Even Your Drunk Uncle Couldn’t Mess Up”

Oh yum! I have similar issues with baking, I just can’t do it very well. Which is why I am kind of a queen of no-bake desserts. Which is good for summer. This recipe will help me limp along in the dessert department til the spring thaw…