In order to write “Room”, author Emma Donoghue created a monster. Inspired by real world events (it’s not difficult to guess which), Donoghue cobbled together bits and pieces of the evils she researched, constructing a person capable of  the horrific deeds which precipitate the situation in which we find our two heroes; Jack and his mother, known by him simply as Ma. But “Room” is not about this monster – in some ways, he couldn’t matter less. “Room” is about the resilience, strength, and enduring love between a mother and child; and about the world(s) they inhabit. 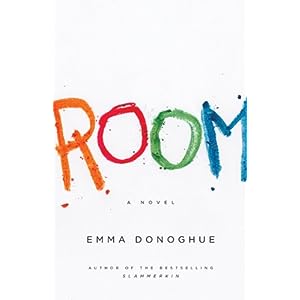 When we first meet Jack, it is his fifth birthday. His world, like any child’s, is filled with the details of his day-to-day life. The furniture he lives on, the food he eats, the games he plays, his bedtime (9pm – the time Old Nick comes to visit). In his own words, Jack draws us into this world – a world which, to him, is everything. Literally. As far as he knows, as far as his mother has told him, their eleven-by-eleven foot room is all that exists. That’s because Ma is a prisoner, and she hasn’t left this space since she was entrapped there nearly a decade prior. These details aren’t immediately apparent to young Jack, but to the reader they are glaringly obvious. The reader is forced to question: burdened thus, how does a person survive? How does love, hope, or happiness survive? More than that, what is the meaning of freedom, once freed?

“Room” is a very simple book, masterfully rendered – a book, as pointed out by Audrey Niffenegger on the jacket, to be read in a single sitting. They say that about every book, right? Well, let me put this into perspective for you: I began reading while relaxing in a bubble bath. I finished reading, hours later, still sitting in the bath – the bubbles deflated, the water long since drained. I literally couldn’t put it down, despite the fact that cold ceramic is, needless to say, not exactly comfortable. I was so engrossed I barely noticed.

Emma Donoghue’s book takes place over the course of, perhaps, only a few months. It is told in the effervescent syntax of a child; freely flowing, ever-evolving, and yet narrowly defined. Donoghue disappears flawlessy into Jack, and only on rare occasions does his voice seem stilted, as though forcibly “reduced”, causing Donoghue’s adult/authorial hand to become apparent. Never, however, does the book feel slow, or insufficient, despite Jack’s many limitations.

Donoghue has said that one of her goals was to illuminate the human condition – to show that Jack and Ma’s story could be, and is, everyone’s story. Jack’s very innocence, and his voice, is the linchpin of this attempt. I found myself remembering details from my childhood that I had long forgotten, pausing to consider them as I read. Though inspiring and uplifting, the book is also unsettling. Vaguely ominous. Upon finishing, I felt drained and vulnerable, and spent the next little while ruminating  worriedly over the book’s events. It’s not a book that I think I will read again, but one that I will think of, and talk about, for a long time to come.

One reply on “A Prison of One’s Own: Emma Donoghue’s “Room””

Great review. I loved Room and I also read it very quickly. It’s one of those books that stays with you.