Yesterday, my father sent me an email about the dangers of compact fluorescent light bulbs. Apparently if they are broken, they will emit mercury and kill you. In the last month his emails have taught me how to check my power-steering fluid levels, that my major is among the top 5 lowest-earning, where to call to have my cell-phone number removed from telemarketers’ lists, and, in two separate forwards, each with  “FYI” in the subject line, that too much Tylenol will kill you. To say that I have a controlling parent would be clichÃ©. My father carries the weight of the world by choice. This is why his heart is failing.

For the last five Marches my parents have traveled to Snowbird Resort to ski. My Dad begins planning for the vacation in December. His first step is wall-sitting. Before plane tickets are booked or reservations at the Cliffe Lodge are confirmed, my father will take out his stopwatch, find a clear bit of wall on our carpeted second-floor landing, and place his feet squarely shoulder-width apart, with his back straight against the wall. Then he will squat. He’ll stay seated on air like this for up to two and a half minutes, his personal best record, squelching his grimaces in order to encourage my mom to join him. “This is the exercise of skiers,“ he tells her, the emphasis in part due to the burning in his thighs, “We’ve got to be in shape for the moguls.”

For the next month, he’ll spend almost every weeknight watching the Warren Miller video series, including Born to Ski and Steeper and Deeper, which are continually renewed from the township library. After he’s sufficiently rewound and re-watched the parts with the deepest powder, my father will browse EBay for ski-wear. The result of such shopping is often unfortunate: my mother, who hates skiing, owns a hideous red, white, and blue full-face mask and a pair of traffic cone orange goggles. They were “just too good a deal” to pass up. “It’s not what you wear, it’s how you ski, Jane,” he says, thumping around the house in ski boots and long underwear.

Undoubtedly, these rituals ensured that my parents were prepared for their trip last March. My father had packed, researched, tested, trained, and simulated. Plans had been finalized, bindings tightened, trail maps memorized. He had guaranteed that whatever the week brought, he would be of top of the situation.

On the third day out on the mountain, my father fell. When he did so, he lost a ski and a pole and could not get up. It was during a blizzard, and while my mom was reading indoors, my father was getting his money’s worth for the week-long chairlift tickets: off-trail in waist-deep powder, which was still falling.

“I know how to ski, Liz, OK?” he later told me, “But it was scary. No one was coming by and I was just lying there for a while.” The other skiers stupid or frugal enough to also be out on the slopes in the storm passed by him, his ugly yellow ski boots perhaps too buried to be seen. When he finally did manage to get himself up and off the mountain, he couldn’t breathe.

I didn’t know about the fall, the subsequent trip to the hospital, or my parents’ early flight home until two days afterwards. My father left me a voicemail. “Just wanted to let you know,” he said, “we’ve got it under control.” In the months that followed, my father again researched, tested, trained, and simulated: monthly stress tests, EKGs, blood work, and a catheterization to inspect his heart provided few conclusions. He drove to the hospital in Philadelphia, and, after his procedures, instructed directions and lane shifts from the passenger seat on the way home. From my inbox I kept learning: about the hidden costs of owning a puppy and ways to prevent heart attack and diabetes.

In June there was a diagnosis: Congestive Heart Failure and cardiomyopothy. Along with the names came rules. No alcohol, little sodium, nothing to raise his heart rate over 120, blood pressure tests throughout the day, blue horse pill Glycosides, white seed-shaped ACE Inhibitors, blood pressure stabilizers, diuretics, Beta Blockers twice a day with food or milk. No skiing. The medicines made him tilt his head upward while he was sitting down so that the room stayed still. Some made him yell at us for leaving drawers open in our dressers and not screwing the cap tightly on the toothpaste. One made his eyes look like they could be deflated with the prick of a pin.  All made him weak.

Through June and July, my father and I carpooled to work as we had the past two summers. Our conversations followed a pattern:

“You’re late. You took a 22 minute shower. Do you know what a water heating bill costs these days?”

Through the intersection at Scotch Road, past the funeral home. Honking and light flashing at cars that hesitate in the rush hour traffic on the Pennington Circle.

“And it’s Tuesday. For the last 20 years, Tuesday is garbage day.”

Applying Chapstick, adjusting the air conditioning, the angle of the seat until inevitably:

We were tired and angry and sad and what we didn’t say we knew:

Right at the fork, past the University. Traffic is slow and we may be late if we don’t hurry.

“This is how I know how to provide.”

For the last month of the summer, I drove myself to work and on Tuesdays, took the garbage to the road.

I spent the next four months studying in London. My father rearranged my luggage tags in the airport and demanded that I bring a bag of cashews in my carry-on for protein. I showed him that I had my passport and boarding pass and told him that I wouldn’t take more than three Advil. “We’ve got it under control,” he repeated.

With my additional British email account, I received twice the amount of messages from my father. He sent jokes about John McCain, pictures of the yellow playground slide in the middle of the Google offices, advice on where to hide my passport in my flat. He updated me on his life, “Doing well. Tired. Busy,” and signed his notes shorthand, “L, Dad.” When I called to video chat my mom, my father’s large blurry oval face would inevitably appear upside-down in the camera’s frame. He’d say hello, then, like a Big Foot sighting, disappear.

In November, I was emailed the good news that my father’s six medications are making his heart pump blood more effectively. Though the rules do not change, he’s now on a lower dosage of the medicines which make him more crazy and frugal than he is to begin with. My parents bought two giant plastic exercise balls and a video to go with them. “You need to roll in a straight line, Jane,” my father instructs, “You work your core like that.” This is the extent of his allowed exercise. He is adjusting.

Because my father carries the weight of the world, his heart is failing, though genetics, a virus, and plain bad luck may also have contributed. In my inbox I’ve saved an email he sent two weeks ago, titled “How to Relax: Twenty Tips for You to Stop Sweating the Small Stuff.” “FYI,” I responded, “I’ve got it under control.” 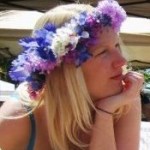 Elizabeth is a New Jersey native and recent transplant to Washington, DC, where she works at a nonprofit that empowers women to act politically on issues of peace and security. Her work can be found at ofheartandmind.wordpress.com.