A couple of weeks ago, we looked at my favorite style heroines of television, so I thought today we might take a trip back into classic cinema to visit my favorite early heroines of style on film. These are the looks I love to emulate whether I’m playing the ingÃ©nue, the damsel in distress, the spunky girl reporter, or the ice princess.

Listen, Breakfast at Tiffany’s is fine if you want to mope around with a Danish and a cigarette holder and a pink tiara, and I completely understand why you might want to, but Charade fashion is for the girl on the go. On the run, more like it. This Hepburn-Givenchy fashion collaboration is for the lady who lunches with one eye on the assassin trailing her. The heels are low, for dramatic chase scenes, there are lots of big sunglasses to hide behind, a leopard print pillbox hat, and the men are, well, Cary Grant. Who could ask for anything more? Just don’t let the bad guy flicking cigarette ash on your clothes intimidate you; it won’t burn. And if it does? Shoot him.

Debbie Reynolds in Singing in the Rain This movie is all about the boots and trench coats. Look at those boots! Those are wide-legged, high-heeled, red rain boots! With a matching coat! For the less practically-minded, it also contains a green sequined dance costume with a rather spectacular pair of fishnet stockings over the even more spectacular legs of the great Cyd Charisse. This is a spoof on old Hollywood, so there’s a whole lotta sparkle, a whole lotta dancing, and a whole lotta Gene Kelly–though I’ve always been partial to a Donald O’Connor type myself.

Katharine Hepburn and Ruth Hussey in The Philadelphia Story

The waists are high, the hair is immaculate, the boats are yaw, and Katharine Hepburn is a magnificent bitch. While KHeps, yeah that’s right, has some stunners in this film–the collared dress with the embroidery on the bodice comes to mind–I am also partial to Ruth Hussey’s magazine girl attire. She’s got little suits, and little hats, and she’s always got a one-liner to spare. 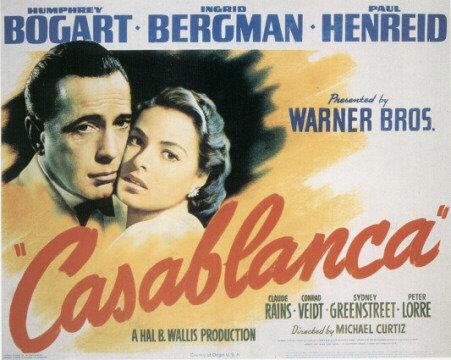 You had to know this one was coming. The simple white suit with the broach when she first comes to Rick’s. The scarf over her hair when she sneaks in to see him. The trench coats and hats at the end. It’s all suitably wartime austere, but it’s beautiful. Here’s looking at you, kid, indeed.

I would never have enough space and time to talk about all the characters and costumes I love from old movies. Claudette Colbert from It Happened One Night is an honorable mention, as are Rosalind Russell from His Girl Friday, and the inimitable Vivien Leigh from Gone with the Wind. Who are your favorite fashion icons of the classic silver screen?

Ingrid Bergman in Notorious was amazing. The self-loathing, conflict, and love (why yes, that is an oxford comma) was so beautifully portrayed!

I loved Audrey’s clothes in Charade! The red suit with the cream pillbox hat? I dress like that everyday in my dreams.

Also amazing are Faye Dunaway’s clothes in Network! She’s such a badass bitch in that movie. Catherine Deneuve in Belle De Jour.YSL dressed her for the film and they were gorgeous.

How can we leave off Bette Davis’s famous green dress from ‘All About Eve’? Or Elizabeth Taylor’s white dress from ‘A Place in the Sun’, the dress that launched a million prom imitations? Pretty much every single outfit in Gentlemen Prefer Blondes?

Charade was OMGMYFAVORITEMOVIEEVARRRRRRRR when I was in high school. I do not know from style, however. I take your word for it.

Doris Day in “Pillow Talk” wore some fantastic clothes. Her costumes through her entire romantic comedy era were designed by Jean Louis. I suspect Janie Bryant is a fan, too.

These choices are wonderful! I love Audrey Hepburn’s style in Charade. Katharine Hepburn also has some wonderful outfits in Bringing Up Baby, and though they are definitely not practical in any way whatsoever, I’d love to wear some of the gorgeous gowns Ginger Rogers had in her films with Fred Astaire.

Oh I forgot Ginger Rogers! I loooove this dress, I think it’s from The Gay Divorcee.

Ginger Rogers is a great one! Everything that everyone wears in Stage Door is fantastic.

She also has a lot of nice dresses and a great riding ensemble in Top Hat, including the infamous blue feather dress Fred hated so much!

That dress is one of my favorites — I was coming into the comments just to mention it.

Joan Crawford In Mildred Pierce. God I want a pair of those ankle strap heels she wears throughout the film. The blue dresses the Haynes sisters perform in in White Christmas ,feather fan included of course. And most of the outfits from the original The Women particularly Sylvia Fowler’s tiny headpieces.

“When a certain gentleman arrived from Rome,
She wore the dress, and I stayed home’.

Those ostrich feather fans are outrageously expensive. I looked into getting one a couple of years ago.

Sisters, sisters! There were were such devoted sisters…