If bad romance novels are to be believed, the hymen is a few inches inside the vagina and must be abruptly broken with a dramatic, grunting thrust. As you may suspect, however, this is not quite accurate, and by “not quite” I mean “not at all.” (NSFW – drawings of vulvas at the bottom of the post.) 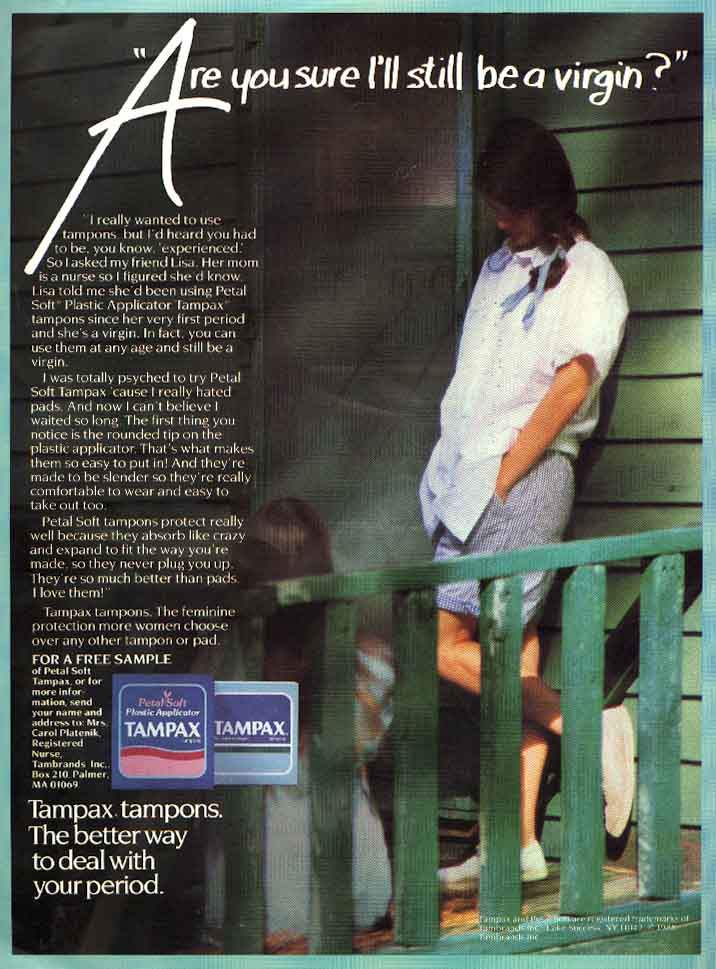 I realized how little I knew about the hymen while working on a research project on the commodification of virginity in American culture. As I read about hymen reconstruction surgery (a topic worthy of a long post all its own), it dawned on me that I could not picture a hymen in my head because I had never seen one and didn’t quite understand where it would be located or what it would look like. A deflated pink balloon, maybe?

Most of us probably know by now that the hymen is in no way, shape, or form a reliable indicator of a woman’s sexual experience or lack thereof (though anxieties over the meaning and significance of the hymen still exist, as this Tampax ad from 1990 suggests). But as Hanne Blank writes in her excellent book Virgin: The Untouched History, even though almost every woman is born with a hymen (estimates place the frequency of women born without them at .03%), most people never see one. So, hymens – how do they work?

According to the RFSU’s booklet on the vaginal corona (the term they prefer instead of “hymen”), hymens are located 1-2 centimeters inside the opening of the vagina, and it is basically just a mucus membrane. It is stretchy and may be pinkish, almost transparent, or white. The tissue is usually somewhat thin but can be thick and even rubbery. Similar to labia, the hymen may have small folds or bigger flowery folds.

Once you understand how the hymen forms, its location and appearance makes sense. Blank provides a concise and accessible description; she explains that the hymen is created “not…as a standalone structure, but rather as a byproduct of the complex creation of the female genitalia.” The inner and outer female genitalia form separately; as what will eventually be the labia and clitoral hood develop, so do the uterus and the vaginal cord, which runs from the uterus to the inside surface of what will become the vulva. As the cord matures, it begins to hollow out. This process is called canalization, and “the last step is when the canal forms an opening, right through the body wall, giving the vagina its outlet. This is what creates the hymen.” The hymen is that last little bit of tissue that did not fully “hollow out” (Blank 32-33).

So, the hymen is not an expanse of tightly-stretched and impenetrable tissue completely obscuring the vagina. [Though it is rare but possible for it to totally cover the vaginal opening – that’s called an imperforate hymen, and if it does not thin and stretch open before puberty it can interfere with menstruation, and usually a trip to the doctor is necessary.] The vast majority of time, the hymen is a flexible ring of tissue (Our Bodies, Ourselves describes it as “a scanty fringe”) at the vaginal opening. This tissue can take all sorts of forms – annular (a ring around the vaginal opening) and cresentic (an opening at the top) are the most common, and other types include redundant (it often folds in on itself and may even protrude), septate (one or more thin “bands” of tissue stretch across what is otherwise open), and cribriform (similar to imperforate but with a few or many small holes) (Blank 37-38 and this web page). Because of the nature of the hymen, descriptions that categorize a woman’s first time having penile-vaginal sex as involving “breaking” her hymen are not really accurate; it’s not a taut, sturdy thing that can be broken like a plate or suddenly perforated like a hole puncher punching through paper. The tissue can stretch, and according to the RFSU how that stretching feels can vary widely from person to person depending on many factors including the thickness of the tissue and the form of the hymen. And while masturbation and various kinds of sex can certainly affect the hymen, it continues developing after birth and can change entirely on its own (Blank 38). These differences help explain why some women bleed or feel pain the first time or few times they have various kinds of penetrative sex and others (most women, according to the RFSU) have little to no discomfort.

Our experiences vary so widely because, like any other body part, our hymens can be pretty different as well. They can be very delicate (Blank suggests that women who do not remember ever having a hymen may have had such thin ones that they painlessly stretched open into almost-nonexistence), but they can also be strangely sturdy – in The Guide to Getting It On, Paul Joannides mentions a study that showed that 19% of “sexually active” women “had no visible abnormalities of the hymen,” though of course this raises a few questions, like what “sexually active” means and exactly what “visible abnormalities” refers to. And it’s quite possible for tiny bits of the hymen to remain somewhat intact through childbirth; it’s not something that simply disappears or stretches once and then remains the same forever.

Like I mentioned earlier, much more can be said about the hymen – I wanted to focus on the bit of flesh itself and not on the (misguided) significance placed upon it as a “marker of virginity” or on the slowly-growing field of hymen reconstruction surgery because those are both interesting and complicated enough topics to warrant posts of their own. But for now, MYTH: BUSTED!

H/t to Inessita for suggesting a Mythbusters post about hymens and sending me the RFSU booklet!

Got a ques­tion you’d like us to dis­cuss (or myth you’d like us to bust)? You can e-mail us at FriskyFeminist@persephonemagazine.com, and we’ve also set up a Tum­blr for the sole pur­pose of receiv­ing com­pletely anony­mous ques­tions at paperispatientsexqanda.tumblr.com.