I have pretty bad chronic depression, but to help manage it, I take Pristiq, a new class of drug known as an SNRI.  I take incredibly small doses, 5mg or less, because I’m really sensitive to anti-depressants, but it’s been a godsend. Now, I really want to get pregnant. However, it seems like there hasn’t been a lot of research on SNRIs and their impact on fetuses. My doctor says it’s better for me to stay on the drug than go off and be super depressed, but the truth is they don’t know what it could do to a developing fetus yet. Switching to more tried-and-tested drugs isn’t an option for me–I came down with severe serotonin poisoning when I tried the SSRIs and almost had to be hospitalized, and I also had a bad reaction to Wellbutrin. So what should I do? Is it better to stay on it, despite a potential risk to the baby, or go off the drug and risk a deep depression setting in? Nine months is a long time, and I’ve worked so hard to feel normal, and I’m so worried about becoming crazy again. But I could never forgive myself if the baby was born with any kind of problem because of my condition.
Sincerely,
Worried About the Baby Blues
Dear Worried,

I’m so glad you sent this in: Pregnancy and depression are both issues that affect women constantly; I suffered from depression during and after my second pregnancy, and it was a nightmare, so I feel very strongly that women need to know about depression and pregnancy.

First, you noted that you only take a small dose of Pristiq: The dose isn’t really relevant mdash;if a drug is very harmful to a fetus, even a tiny amount might do damage, and if a drug is safe for fetuses, then even a big dose might be fine. It all depends on the medication.

I don’t know as much as pregnancy and depression as I would like, so I talked to a Persephone member who is a doctor, and she sent me this:

I did a quick literature search on this, and there are no studies that have been conducted specifically on pregnancies in women taking SNRIs. I did find a couple of review and meta-analysis papers based on records of women who took an SNRI or SSRI during pregnancy. From my brief reading, there is an increased chance of preterm birth, and mild behavioral and respiratory issues at the perinatal and neonatal stage. However, these reviews suggest these issues are typically self-limiting, and that the risks are comparable to those associated with SSRIs. I cannot find any SNRI (or SSRI) that is supposed to be lower risk than desvenlafaxine; in reviews the risks are comparable. Here are links to the pubmed entries I found:

The third link is the most positive: Although it did find changes in newborns who had been exposed, the problems were very mild and went away quickly.
I am assuming you have a partner, although you didn’t mention it: You need to think about how they feel, too; do they support you either way? If you become severely depressed, will they be able to care for you during the pregnancy? A serious depressive episode combined with the stress of pregnancy and new parenthood can be devastating to a relationship. On the other hand, as you said, if something were to happen to the baby, that would be terrible as well. Keep in mind, however, that just because your baby is affected by a drug, does not mean the effects will necessarily be terrible or lifelong – as that third study found, the changes were mild behavioral effects that went away in a short period. You might bring these abstracts to your doctor to help you talk about your concerns; he or she should know what types of fetal effects may be seen and whether they would have any long-term affect on your baby.
In the end, this is something that you and your doctor need to decide: He or she knows you and your medical history best, particularly in regard to your depression, of course. I cannot legally tell you what you should do, and honestly, I’m not sure what I would do you in your place – it’s a difficult decision, for sure. However, no matter what you decide, I wish you the best!
Sincerely,
Queenjulie
Author’s Note: Thank you to Dr. WildeTypeWoman for her help! 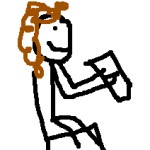 Iâ€™m becoming a nurse because I really like sticking needles in people. I also like gangrene, benign cysts, crepitus, and weird lung sounds. I watch videos of IV insertions on YouTube for fun, and I make my kids let me practice using my stethoscope on them. I no longer hold my husband's hand while we're watching tv; now I hold his wrist so I can keep an eye on his pulse rate. He's remarkably tolerant.

4 replies on “Ask the (Student) Nurse! Depression and Pregnancy”

Because this is a question I may one day face, I’d like to know of any resources anybody has found. Either places to find accessible information about antidepressants and pregnancy (and post-pregnancy with breastfeeding, etc) or places to find support if you choose not to use the drugs. Doctors are important, but they can only do so much.

@Anna–I really love the Mayo Clinic’s website; we’re taught that they have some of the most accurate medical information available to the public, and it’s really well-written and comprehensible to the non-medical person. I actually use it all the time for nursing information that isn’t well-covered in my texts or that I want to be able to explain to my patients.

I would check these links out: The first is brief, but the second has a list of antidepressants and information about taking them during pregnancy.

I can’t speak from experience on either front, but Worried About the Baby Blues might want to check out Dooce.com. After Heather Armstrong suffered from a terrible bout of post-partum depression with her first daughter, she decided to stay on her meds during her second pregnancy. It was a while ago, but I remember her being very eloquent and straightforward about the potential risks and her reasoning for doing so.
Good luck, WAtheBB!

I was a regular reader of Dooce while Heather was suffering from depression after the birth of her first daughter, and it was absolutely heart-wrenching. Although she isn’t a medical professional, her experiences are definitely something a future mother with depression might want to read, just to see what someone who has been through the absolute worst has to say about it. Thankfully, most people will never have as severe issues as she had.