I am still in the tropics, and with the sun and the surf comes one major drawback for any arachnophobe: spiders everywhere. I have hated the things my entire life and here there is no escape. I walk into the bathroom: spider. I smell a flower: spider. I sit and my desk writing and look up and there is no doubt a spider running across the wall. Currently there are three large bites on my back that I’m telling myself were made by really big mosquitoes. Have you slapped that random itch on your arm yet? I have. But rather than dwell on my paralyzing fear, I decided to explore it. And because I like it when it hurts so good, I did it in sandals.

My guide through the Great Spider Exploration of 2011 was a Guatemalan named Javier who’d been living on the island of St. Maarten for 22 years. As the groundskeeper he’d run into his fair share of giant creepy crawly things. He told me that when the house I’m staying at was first being built, they started digging up the earth and a mass of large ground spiders came pouring out. Pouring. That was the word he used. “They are all in the garden now,” he laughed, pointing to the three hectares of bush and trees we were about to explore. I contemplated backing out but I had come too far, it was time to see this through.

Our first stop was a little contained garden space full of low-growing shrubs. We stood on giant rocks as he pointed to web after web of what I would describe as “horrifious,” but are actually called the Silver Argiope or the Banded Garden Spider. 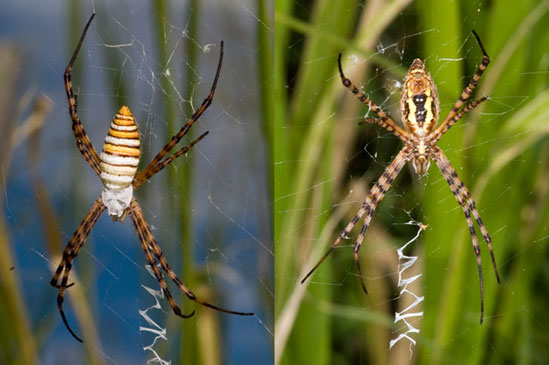 The webs were massive and interconnected. They sit in rows, some with giant wrapped bundles of prey, liquefying for lunch at a later date. I had to admit that they were actually somewhat pretty. Their golden and spotted hues were reflected brilliantly in the sunlight. I got close enough to feel a shiver of adrenaline run through my body as I took my own very scary photo. The thing about spider photos, though, is that they don’t really turn out well with an iPhone. Still here is my own go at being a nature photographer:

Javier gave me a quick run down of the more common spiders around the property. The ones I kept finding in my room, he explained, were these little guys called the Gray Wall Jumper. Although I had not seen any in my room jump, they were fast little shits that filled me with hopelessness as I chased them about with my shoe. 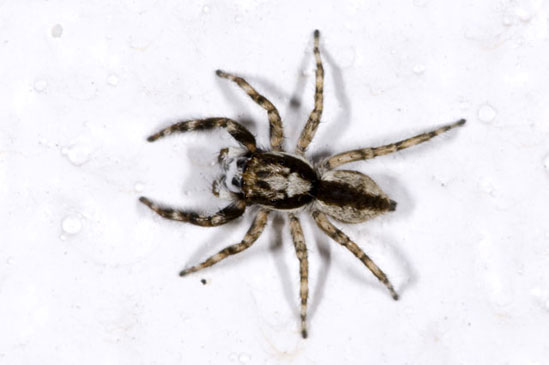 The crab spider was a colorful thing that I often found crumpled into a ball in the exercise room. They apparently did not spin webs but simply waited on nearby plants ambushing their prey. This is, of course, proof positive that spiders are the minions of the devil 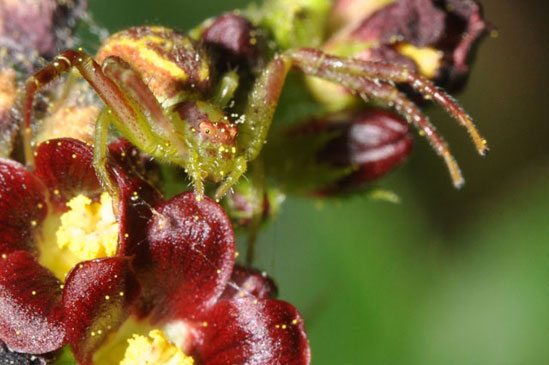 But then we came to the main feast. The spiders that I had been apprehensive of since they were so colorfully described to me by the little girl I am taking care of as the “scariest things I’ve ever seen.”  They are a type of tarantula but are extremely fast-moving and usually hang out under logs during the day. 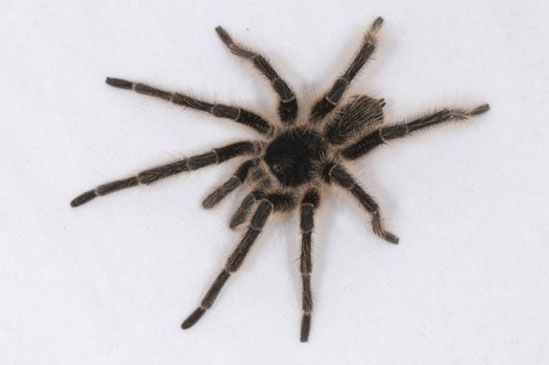 “Are we going to try to find one?” I asked
“We will find one,” was the reassuring reply.

So now, well-versed on the monsters that haunted my dreams, we tramped off into the bushes. I’m not going to lie, I made him go first every single time. Occasionally he would freeze, squint his eyes and crouch down a bit. I am, by the way, inept at spotting these creatures in their natural habitat (I prefer to think of it as my brain editing out the bad parts) and would often find them smack dab in front of my face before my eyes were able to focus on what I was looking for. Not fun, by the way. I felt something run over my foot. It could have been a ladybug but I immediately assumed the worst and screamed. Then blushed as Javier shot me a look of pure pity.

“The blue ones are nice,” he said, pointing at a web that was shimmering between two vibrant fuchsia roses.
“What do you mean nice?” I asked, “Nice like they won’t bite you, or nice like pretty?”
“Nice like their bite doesn’t hurt as badly as the Banded Garden Spider.”
“That is not my definition of nice,” I mumbled and curled my toes hoping it would somehow protect them from lurking fangs that were no doubt nearby.

We passed through through some trees and over a wooden bridge and I could sense what was coming next. The big one. It was time. We rounded a corner and there stood a pile of rocks. “The very favorite home of the big tarantulas.” Javier beamed at me.
“Wait a second,” I said, attempting a stall to gather my druthers.  I saw Javier lean down and put his hands on a rock “Wait, wait, just a second please,” I pleaded.
“One second,” he said and flipped the rock. I held my breath.
Nothing. “Don’t worry we’ll find them,” he laughed. He flipped another rock.

I saw the legs first. They were thick, black, hairy things that quickly curled themselves inward as the sunlight hit its body. It’s bulbous head and round torso shrunk in at first, then quickly sprang into action, darting away and I could hear it scuffling through the leaves as it fled out of eyesight.
“Jesus, that’s enough. I’m all spidered out now,” I said as I noticed goosebumps rising in the 90 degree weather.

“Just a few more,” he said, lighting a cigarette. It hung from his mouth as he leaned over and flipped another rock. Nothing. Then a log. Still nothing. Then with a callousness I can only describe as ice-cold he kicked a log towards me (okay fine, it still landed several feet from me) and the biggest spider I have ever seen unfurled its massive legs and lumbered. First in my direction, which sent me screaming and darting a few feet to the left. Then it changed course and took off for some nearby bushes. Javier, clearly enjoying this, walked right up behind the spider, pointed his finger, and nudged his big fat body. I felt horrified, but ever-so-slightly amused. The spider didn’t turn around but merely raised its front legs in the air as if to say “Okay, Jesus, that’s enough.” Javier took another drag of his cigarette and nudged the spider’s body again, before it made its way out of reach.

As we walked back through the garden, I have to say, the other spiders had started to look a little less formidable and a little more wimpy. I laughed at myself for being such a scaredy cat, and for a moment, I was no longer afraid of the creatures. Rather I felt in harmony with them, as though their complete destruction was not something I would wish for immediatly if given the chance. “Hey, lady, you just walked right into a big old spider web,” Javier’s voice shot into my daze.

“Get it off me, get it off me!” I screamed as I thrashed about on the lawn. Hours later and I still find myself brushing my arms off. Perhaps I am not cured of my fear for these be-fanged monstrosities. However, I do know now that I can handle living in their presence. And even, if perhaps only on occasion, seek out their presence, to stand in awe of what nature can create when it has a really sick sense of humor.

5 replies on “Hunting for my Greatest Fear: Spider Edition”

Excellent progress nonetheless! I’m actually working in a spider behavioral lab next semester: picture shelves up to the ceiling stacked with tanks of spider colonies, plus a variety of tarantulas and spiderlings hatching all year long…

Move to the Arctic; we have no spiders here for 10 months of the year :)

Ieehhl this creeped me out to no end. My cat developed a new hobby this week: hunting for really big spiders outside and taking them inside (when they are still alive!!) to play with. Not funny. Not even in the big city are we safe from these freaks of nature.

Thanks for helping me make peace with cold weather, which I used to hate.

I hate spiders. I’ve tried getting all “the enemy of my enemy is my friend” (because they eat bugs), but nope, still hate them.