Ah, Gocco printers. If you’ve read a wedding blog in the last two years, odds are you’ve come across Gocco-ed invitations, whether you realize it or not. The Gocco printer is a self-contained screenprinting kit of Japanese magic. (That last part isn’t actually part of the definition, but it should be.)

They were first introduced in Japan in 1977 by the Riso company. Their popularity waned over the years as computers and at home printers became more accessible, but they’ve recently made a comeback in crafty circles because they’re relatively inexpensive, easy to use, and can make as many as 100 prints (with multiple colors!) in one inking. Sadly, Riso closed its doors on Gocco products forever in 2008, but groups like savegocco have compiled resources for Gocco products and other similar screen printing systems like the Yudu or PhotoEZ. Many Gocco products are available on eBay and Etsy. A Gocco printer (or other screen printing kit) might be right for you if:

Gocco is probably NOT right for you if:

I bought my Gocco last year to print my own wedding invitations. It probably ended up being about $20 cheaper than having someone else make them or ordering them from a company, so be warned that this is NOT an automatic money saver. It is, however, really fun and cool if you like the idea of making your own invites. I originally planned to print other stationery to sell, but life happened (as it does) and my Gocco ended up in the closet, unloved, until almost a year later. I volunteered to print wedding invitations for a friend, and so the Gocco was dragged back out of the closet this week.

Here’s how the Gocco works: All you need are two AA batteries, flash bulbs, a carbon-based image or photocopy, and an emulsion-coated screen (the bulbs and screens come together as a kit). When the bulbs are flashed, the carbon in the drawing or photocopy burns the screen into a stencil. You can design and print your image and then make a photocopy, or you can draw your image with carbon pens. The image needs to be 3.5×5 inches or less. Once you have your image, ink, two bulbs, a screen, and paper for printing (I usually get mine at papersource) you’re ready to go!

The first thing you’ll need to do is screw your flash bulbs into the hood. The bulbs supposedly contain lead (the information on this is vague), so wash your hands after handling them and flash outside to be extra safe. Snap the hood into place on the top of the Gocco. The Riso logo should be facing you. After you’ve got the hood snapped on, place your 3.5×5 carbon image on the pad. Slide the blank screen into place, orange arrow facing you and pointing left. If you have a blue filter (sometimes the kits come with one), put it behind the clear film on the screen. When you have everything situated, close the printer and press down on firmly on the two front corners. The blinding flash that sears your retinas lets you know it’s working.

After you’ve flashed the screen, peel the photocopy off. You should be able to see where the image has been burned out. Unfortunately, I could tell immediately that this screen hadn’t picked up all of the image. Sometimes thin lines aren’t recognized or the photocopy bends during burning, which is why you should always get two screens and four bulbs at a time just in case.

I decided to ink up the screen anyway to make sure that it was a bad burn before I used my other screen. Squiggle your ink on the side of the screen with the clear sheet, then fold the clear sheet back over it. Slide your screen with the un-inked side facing you. If you are using more than one color, use the barrier foam that comes with your Gocco to keep the colors from bleeding into each other. (I didn’t, because I was pretty sure it was going to be a bad screen and didn’t want to waste it.)

Place your paper in the center of the pad and close the printer. Press down firmly and hold it for a second, then lift.

As I suspected, the screen didn’t burn correctly. Luckily I have a second screen and set of bulbs left, so I’ll be able to try again. Even though I have experience using a Gocco, it’s still mostly a system of trial and error. To avoid getting a messy burn like this, make sure your lines are thick and clearly visible. Avoid touching the photocopy as much as possible to make sure the carbon ink comes directly in contact with the screen. (I think this may have been my problem this time.) Here’s what a clean burn looks like: Gocco printing is a fun and relatively inexpensive way to get into DIY screen printing, but there’s definitely a learning curve. Give yourself time to experiment and extra supplies if you decide to take the plunge. Now that I’ve got mine out again, I’m excited to design some new stationery and experiment with it. Happy Gocco-ing! 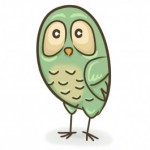 I'm a twenty-something freelance writer and designer who lives in Memphis, TN with my husband, cat, and chinchilla. I require coffee and the internet to live.

One reply on “The Lazy Lady’s Guide to DIY: Adventures in Gocco Printing”

So cute! I love those invites.