For those of you who haven’t heard of her, Caitlin Moran is a knicker-widdingly funny and sharp columnist for the Times of London. That’s her on the cover of her new book ““ eyeing you sardonically under her lock of white hair, looking like Rogue might have if she’d ever decided to be a bit more fucking sassy.

Sadly, the majority of her writing is now concealed behind the Times paywall: she’s also on Twitter, but she’s at her best in this book.

It starts off with Caitlin, aged 13, living in a small house in suburban England with her parents, seven (!) younger siblings, and a dog who is “as stupid as a barrel of toes.” It ranges through her career as a music journalist, TV presenter, and columnist, and her personal life. Trying to summarize what she covers here is in serious danger of just becoming a collection of buzzwords we’re used to seeing in hand-wringing lifestyle articles about Women These Days ““ bullying, homeschooling, fat, drink, Brazilians, heartbreak, high heels, sex, pregnancy, marriage, abortion, motherhood, career, cosmetic surgery, aging, and Lady Gaga ““ but it never, ever reads like that. It’s always fresh, funny, heartfelt, and seriously interesting.

Along with memories of masturbation, and shitty boyfriends, she proposes a handy way to spot the newer, more insidious forms of sexism: is it polite? And is it happening to the men, too? If the answers are no, then hey, someone is being sexist at you, and they should stop (and one effective way to get them to stop is to point out how rude they’re being). Trust an English woman to boil feminism down to politeness, but it’s also, in a way, very true: feminism, and the wider social justice movements, are at their core just advocating for common decency for all human beings, by excavating all the ways in which we screw each other over, and finding out how not to do that any more. Moran is “neither pro-women nor anti-men. I’m just ‘thumbs up for the six billion.'”

As I went through the book, laughing and crying and thinking, I tried to bookmark every quote that struck me. Very soon (maybe around chapter 3?) I stopped trying ““ there were too many. Always witty and quotable, as here, on aging:

Lines and greyness are nature’s way of telling you not to fuck with someone ““ the equivalent of the yellow and black banding on a wasp… Lines are your weapons against idiots.

and here, on why feminism is good for everyone:

If women’s liberation truly comes to pass ““ as the slow, unstoppable gravity of social and economic change suggests it must ““ then it’s going to work out pretty peachy for the men, too. If I were the patriarchy I would, frankly, be thrilled at the idea of women finally getting an equal crack of the whip. Let’s face it ““ the patriarchy must be knackered by now. It’s been 100,000 years without so much as a tea break.

her writing can also be beautifully and explicitly magical, as when she’s describing the birth of one of her daughters:

I walk from St. Paul’s to Hammersmith for you, barefoot, quietly sighing, from Angel to Oval, the Palace to the Heath… Gravity is the magic I couldn’t find before, strapped to the bed, two years ago. Gravity was the spell I should have invoked. I was looking in all the wrong grimoires.

(and is equally as exquisite, by the way, as her description of her pregnancy that ended in abortion). 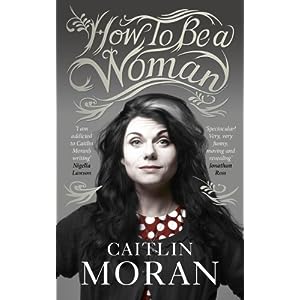 This is not the great new work of feminist theory, and her bald statement that there are no good contemporary feminist spokespeople probably won’t sit well with most of us (though her assertion that women were oppressed because we get cystitis has a certain appeal for this UTI-suffering writer, but sadly it’s probably not historically accurate). This book is part-memoir, and part-manifesto ““ but that’s what makes it work so very well. This is the book you give to your sister, your cousin ““ anyone who is a feminist, or thinks they aren’t, but really are. It isn’t the be-all and end-all of anyone’s feminist education (if there could ever be such a thing), but it could be the start of someone’s, or make you remember why the f-word is so effing important in the first place.

2 replies on “Book Review: How to be a Woman”

I just finished this book and wanted to echo the love for it. I’m actually hoping to use it as a bit of a feminist gateway for RahBoy, who loves Caitlin Moran’s music work and TV appearances so is keen to read the book.

She’s a lovely writer, alternating between riotously funny and sometimes quite haunting. Reading the book is like having a chat with your funniest, wisest friend. It’s awesome! Read it now!