Earlier this summer, I revisited Sports Night on Netflix Instant. This was my third pass with the series. I watched its original ABC broadcast when I was in high school, then the show was syndicated on Comedy Central during my first year of college. Sports Night was hamstrung by poor ratings. However, I was a big fan. The friendship between executive producer Dana Whitaker (Felicity Huffman) and senior associate producer Natalie Hurley (Sabrina Lloyd) resonated with me especially.

Creator Aaron Sorkin laces his scripts with enough ping-pong dialog to recall Diablo Cody. Director Thomas Schlamme visualizes this with walk and talks that makes the characters seem (a) very important, (b) super-busy, and (c) connected through work. Sorkin’s liberal politics would inform The West Wing, the NBC drama he launched during Sports Night’s second season and rode to ratings and Emmy glory after ABC cancelled Sports Night. However, Sorkin’s convictions are laid bare on Sports Night, trumpeted by characters who confront story lines about drugs, sexual harassment, and institutional racism in an unsubtle but well-intended fashion. I don’t say this to belittle the show’s efforts, nor do I ignore that it was under constant threat of cancellation and couldn’t waste episodes. Furthermore, though the show risked turning managing editor Isaac Jaffe (Robert Guillaume) into a noble black man, he resisted being cast as a model minority or a benevolent patriarch by his predominantly white staff.

Barring the commentary around The Social Network’s angry nerd misogyny and the West Wing episode reviews on this site, Sorkin needs more consideration – and criticism – for his views on feminism. There’s a powerful, if heavy-handed, scene in “The Six Southern Gentlemen of Tennessee” where a member of the wardrobe department (played by Janel Moloney) admonishes anchor Casey McCall (Peter Krause) for taking credit for his style on The View. Since wardrobe is run by women, this scene has a feminist edge to it: take our work seriously. Though the show explored workplace romance, it also explored a variety of relationships. While McCall and co-anchor Dan Rydell take focus (and generate slash-fic), the friendship between Whitaker and Hurley is more compelling to me.

Sports Night debuted alongside Ally McBeal’s second season. That show was experiencing a peak in ratings, reaching 13.8 million viewers. Sports Night scored 10.5 million viewers in its first season and was shuttered after gaining a million more the following year. McBeal also courted controversy with a June 1998 Time cover article that pitted McBeal against Susan B. Anthony, Betty Friedan, and Gloria Steinem, asked if feminism was dead, and wondered if McBeal killed it with her neuroses and short skirts. Yeesh, no wonder Calista Flockhart performed “My Short Skirt” at The Vagina Monologues.

It’s to Sports Night’s credit that Whitaker and Hurley never danced with an imaginary baby. They are two talented, motivated women in positions of authority who they take their work very seriously. They also work in an area of journalism dominated by male machismo and give orders to men. Both women negotiate being supervisors to employees for whom they have romantic intentions: Whitaker has a protracted flirtation with McCall stretching back to college; Hurley dates associate producer Jeremy Goodwin (Josh Malina), whom she helped hire.

While I’m glad these women are flawed individuals instead of super women, I wonder whether they bring too much of their personal lives into the workplace. Whitaker’s conflicted feelings for McCall in the first season, then efficiency expert Sam Donovan (William H. Macy) in the second, inform many of her professional decisions. She’s also frustratingly quirky at times, like when she peels off her underwear during a date out of boredom or rules that McCall should date around for six months before they get involved. Hurley is fond of bringing the entire staff into any disagreement she has with Goodwin, no matter how minor. I was surprised to find Goodwin, who I found so adorkable in my late teens, too often come off as a condescending, borderline emosogynist who challenges Hurley and Whitaker’s authority, believes himself to be the smartest man in the room, and is too cowardly to admit to Hurley that he’s dating a porn star (Paula Marshall) when they briefly split toward the end of the second season.

However, there might be something to Whitaker and Hurley challenging liberal feminist corporate ideology. They cry at work. They project their feelings onto professional tasks. They’re honest about their feelings. They gossip. They match-make. They play trivia games with the staff when the day’s too much of a grind but stand up for themselves and earn their respect. Whitaker comes close to lashing out at rival producer Sally Sasser (Brenda Strong) when she finds out she’s involved with McCall toward the end of the first season, but stops herself and apologizes. None of this hinders their work in any real way.

What I especially like about Whitaker and Hurley is that they have a friendship that challenges the traditional boundaries between mentor (Whitaker) and protÃ©gÃ©e (Hurley) and is based on trust. These women have each other’s back and don’t fight for the affections of a man. While I’m not sure any of their conversations pass the Bechdel Test, the men talk about women in virtually every scene too. Yet I wish the women included associate producer Kim (Kayla Blake) in more of those late-night office conversations. She’s the only woman of color in the production booth and works directly under them. Whitaker makes a concerted effort to groom Hurley as her successor, but isn’t shown providing that same attention to Kim.

American comedy has long been interested in working women, whether it’s Hildy Johnson in His Girl Friday, Julia Baker in Julia, Mary Richards in Mary Tyler Moore, Khadijah James in Living Single, Miranda Hobbes in Sex and the City, C.J. Cregg in The West Wing, or Betty Suarez in Ugly Betty. I think we can put Whitaker and Hurley in conversation with white female media professionals like 30 Rock’s Liz Lemon or trace a lineage between them, Murphy Brown, and Jane Craig, Broadcast News“˜ television news producer, who doesn’t apologize for crying at work and is peerless at her job. They absolutely deserve to be in the conversation when we talk about who on-screen women at work are, and who they still need to be. 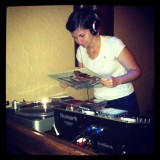 One reply on “Female Friendship on Sports Night”

I’ve never really enjoyed Sorkin’s shows, but I am giving this one a shot on Netflix. I’ve watched 3 or 4 episodes and am not hooked. I’ll probably watch a few more, but I may give up if they don’t grab me. I do like Josh Charles and Felicity Huffman (in general), so we’ll see.