[pullquote]”I remember the fire. The heat. Then I carried you out the front door.”[/pullquote]

We’re jumping forward a few episodes and heading to Lawrence, Kansas. In the past few episodes Sam and Dean have faced off against killer bugs, a shape shifter and the urban legend of a hook man.

A woman is unpacking her sad, sad memories when her daughter interrupts with tales of a haunted closet. She is, frankly, a little too old for that sort of thing. Mom declares the closet free of monsters, but a point-of-view shot from inside the closet indicates otherwise. After some words of comfort, and blockading the closet door with a chair, the daughter is in bed and the mother can go back to unpacking in the dark. Seriously, she’s unwrapping fragile picture frames next to IKEA desk lamp. She hears some skittering in the darkness and, assuming that her new dream home has rats, heads to the basement. Because that’s where the rat traps are? The phone book to call an exterminator? Who knows.

[pullquote]”I remember the fire. The heat. Then I carried you out the front door.”[/pullquote]While in the basement, she finds a metal box containing photos. Photos of the Winchesters. John and Mary young and in love. Baby Sam and Dean covered in boogers. Lady, you need to write a nasty Yelp review for whatever real estate agent tricked you into buying the old Winchester place. What with the demons and the fires. Plus the place has zero curb appeal. Upstairs in the little girl’s room, the chair holding the closet door shut slides across the floor and the door begins to creep open. A fireball appears out of nowhere and the girl screams.

Ghost ship? Cattle mutilations? Which job to take? Dean is busy scanning the news for hints unexplained phenomena, like the guy who shot himself in the head. Three times. Sam can’t shake his latest nightmare. A woman in a house calling for help. He suddenly recognizes the tree in front of the house from an old family photograph. It the house in Kansas where their mom died. He tries to convince Dean that they need to go to Lawrence to help the family that lives in their old house. Dean’s not willing to to go unless Sam tells him what is really going on. He tells Dean the truth about his prophetic nightmares. That he saw visions of Jessica’s death in the days before it actually happened. This is all a bit much for Dean. He tries to convince Sam that his dreams are just a coincidence, not to be a reassuring big brother, but to avoid going back home. As painful as it will be to go back to that house, he knows that they have to help these people. It may even be a chance to catch the thing that killed their mother and Jessica. In the light of day, the house in Lawrence looks like a generic middle class home with vinyl siding and tacky fake shutters. It almost seems silly that the boys would be so anxious and fearful. You expect a dilapidated farm houses or a run-down Victorians manse to give grown men the willies. Not a pre-fab suburban tract home. What scares the boys is not the house itself, but the horrible and unexplained tragedy that occurred within.

Our mom from earlier answers the front door and Dean starts in with the usual federal agent rigamarole, but Sam interrupts him an even better story: the truth. They’re the Winchesters and they grew up in this house. Jenny found a box of old photos and letters in the basement, so she knows they’re telling the truth and she invites them in. We meet her two children, Richie a baby with a serious juice addiction, and Sari, the girl who faced down the fireball. Jenny doesn’t seem to fond of her new home. The lights flicker all of the time and she can hear rats scratching in the basement. Sari wants to know if the fiery figure lived in the closet when they lived in the house.

What Jenny sees as a bad adventure in equity, the boys see as signs of a malevolent spirit. They can’t agree on the best course of action. Sam wants to run back into the house and scare them out. Which would obviously not work. Dean wants to take things one step at a time. “If this were any other job, what would we do?” Usually this calls for research into the history of the house, but they already know what happened. Well. They know what their dad told them. They were both much to young to remember anything. Without telling Sam, Dean puts in a call to their father in the hopes that he is checking his voicemail. His voice is cracking and he’s near tears as begs his father for help.

Back at the house, Jenny has called in a plumber to deal with a backed up sink. While he’s alone in the kitchen one of Richie’s toys, a mechanical money that bangs symbols and laughs, starts up by itself. Ugh. Who buys their kids such creepy toys? This next scene is the worst. After unplugging the garbage disposal and checking the switch, our oblivious plumber starts fishing around in the drain for the source of the clog. You know what’s going to happen, but the scene is dragged out just long enough to make your palms ache from fist clenching. And yes, while the poor man is being horribly maimed that stupid toy monkey is just laughing and clanging away.

Sam and Dean are at the garage their father used to own posing as cops investigating John Winchester’s “disappearance” 20 years ago. They’re interviewing his former business partner who reveals, much to my shock, that John Winchester “was a stubborn bastard.” He didn’t talk about the fire at first. After a while he got it in his head that something caused the fire that killed Mary. He started reading books about the occult and seeing a palm reader. “I begged him to get help.” How could he know that that’s exactly what John was doing? Lawrence, Kansas has a surprising number of psychics who advertise in the Yellow Pages. Dean recognizes one name, Missouri Moseley, from their father’s journal. The best thing about this episode is that Missouri Moseley is played by Loretta Devine. She knows who they are and what they’re looking for before Dean has a chance to concoct some half-assed story. “You boys grew up handsome,” she says, in the understatement of the century. She knows about Jessica and how their father is missing. Much to Dean’s annoyance, she doesn’t know where he is, though.

Boy, you see me sawing some bony tramp in half? You think I’m a magician. I might be able to read thoughts and sense energies in a room, but I can’t pull facts out of thin air.

Their father came in for a reading shortly after the fire and took Missouri to house in the hopes that she could help track the thing that killed Mary. She couldn’t sense exactly what it was, but it was certainly evil. The boys tell her about Jenny and the kids and she seems shocked. The house has been dormant since the fire. She doesn’t understand why this thing is suddenly back causing trouble.

At the house, Jenny has run off to investigate scratching sounds and left Richie the juice junkie alone in his playpen. An unseen force lets him out and opens up the fridge. Richie, jonesing for a juice fix, crawls into the fridge and the door slams shut behind him. When his mom comes back, she starts to panic and search around the house. Just after she finds him in the fridge, unharmed thankfully, Sam and Dean knock on the door with Missouri in tow. Missouri uses her ways to convince Jenny that they are here to help. Once inside, Missouri decides that whatever is in the house is not the same thing that took Mary. In fact it’s more than one spirit. There’s a poltergeist that wants to hurt Jenny and her children and a second one that she can’t quite get a fix on. They start working on a purification ritual at the house while Jenny and her kids are safely gone. Sam, Dean, and Missouri have each taken a floor and the poltergeist is hard at work trying to kill them. Missouri get hit with a flying buffet table in the basement, Dean dodges flying cutlery in the kitchen and Sam tries to fight off a choke-happy lamp cord. Luckily Dean is there to save the day, as usual. The ritual was a success, it seems, but the house is completely trashed. Missouri volunteers Dean to clean up the mess and Jenny seems relieved that she can finally enjoy her new house.

Sam can’t shake the feeling that something is wrong and they camp out in front of the house. Inside, Jenny is at the bedroom window screaming for help. She’s trapped in her bedroom and the fiery figure appears in Sari’s closet. Dean kicks in the door and rescues Jenny while Sam grabs the kids. Once their almost to the door Sam tells Sari to grab her brother and run. He’s slammed to the floor and dragged back into the house. Dean’s chopping down the front door while Sam is getting tossed around the house and trapped up against a wall. Dean rushes in as the spirit is moving across the floor. He raises his salt gun and Sam yells out for his to stop. He knows who the spirit is now. It’s their mother, Mary. If I had to spend eternity in a nightie, I’d haunt some people too. She tells them that she’s sorry, and goes off to fight the poltergeist that’s holding Sam. She comes aflame again and bursts up towards the ceiling. Sam is released and they know that it’s finally over.

Missouri explains that Mary’s spirit destroyed itself fighting the poltergeist. And that she did it to protect the boys. Sam asks her to explain what’s been happening to him. The dreams. The premonitions. She just doesn’t know. As they leave town, Missouri heads back to her house. Where John Winchester is waiting on the couch. “That boy,” she says, “he has such powerful abilities. Why he couldn’t sense his own father, I have no idea.” He doesn’t explain why he refuses to see his boys. Only that he has to find out the truth. 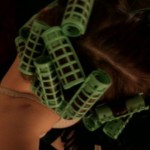 Couple things that were immediately or in retrospect memorable about this episode:

1) It’s your first hint that Mary was a complete badass. You can kinda write it off as “she’s been dead for 20-odd years and knows the lay of the land” and maternal protectiveness, but it also makes a lot of sense considering what you know by later seasons.

2) If you were to ask me cold what I remember about this episode, it’s Dean’s completely panicked run when Sam gets trapped in the house. There’s no elegance or athleticism to that run. His feet are slipping and he’s more bowlegged than usual and it’s practically his entire character in one 5 second sprint.