Last night, I was laying in bed with my boyfriend and grading papers while he read out loud some funny Internet answers to ridiculous questions. I was having a good time and laughing quite a lot until he read one that wasn’t very funny at all. The poster asked, “What is the secret to understanding women?” As you might suspect, the Internet Oracle gave a fairly typical answer, one that us women are quite familiar with. He said:

Men, simple beasts that they are, take all 3 of the above as a comment
on the advancing season, or an invitation to discuss the astronomical
basis for variation in day length.

Meanwhile women, accustomed as they are to speaking in code, assume
men do the same.

So, his “I’m hungry” gets interpreted by her as “your ass looks very fat today” or “I’d like to have sex with that woman over there” or even “my hovercraft is full of eels”. Strangely, the more innocent, direct and obvious a comment, the more likely it is to be interpreted as some subtle insult. She takes offence, he notices and asks “what’s wrong?” to which she replies “nothing”. There ensues an escalating exchange during which she continues to deny anything is wrong while getting more and more angry at him for failing to apologise for the ‘insult’. Meanwhile, he knows she is angry, and gets more and more frustrated at her refusal to tell him why.

And so it continues, generation after generation. Men still aren’t mind-readers, and women are still mad at them for it. ‘Twas ever thus, and ever shall it be.

(Copyeditor’s note: [sic] to that whole quotation. My poor little ladybrain was overworked and confused, trying to fix all the errors.-PoM)

My boyfriend couldn’t understand why I wasn’t laughing so I explained. I started off by asking him what he would say if he got a job offer and the employer asked him what kind of salary he was looking for. He sat in silence wondering where this was going, so I said, “You wouldn’t say anything. You would ask them what they were prepared to pay because maybe it’s better than what you would ask for. If you answer first, they will talk you down from what you want.” He nodded in agreement and I continued.

“It’s exactly like this scenario that plays out in our home every other week or so when we are choosing a movie. I have something in mind but maybe you have something better in mind, so I ask ‘What do you want to watch?’ However, you assume that I am not interested in your opinion at all and instead of suggesting something, you often say, ‘Well, you already know what you want to watch so why ask?’ But really, I just want to know if you had a better idea and instead of an answer, I get an insult. That’s the situation I’m talking about. That’s what’s unfair about what the Oracle said because so many men just assume we’re playing games and are indecisive, stupid women rather than people with opinions and thoughts equal to a man’s.”

I find myself constantly infuriated that women like Angela Merkel, Carol Bartz, and Marie Curie have changed our world, proving that women are every bit as capable as men, yet we are still paid less, promoted less, and noticed less. And then men make degrading jokes about us without ever considering the implications of what they are saying. It seems that no matter what we achieve, we are still discriminated against because too many men in some way–great or small–believe that we are lacking in some faculty in which men are not.

A woman’s ability should be evaluated on her individual merits rather than judged in comparison to all others of her kind. In the lands of academia and capitalism, those women I mentioned were successful because of their ability to observe and modify, not because of some biological distinction. And they didn’t all get together and combine their collective genius to win a Nobel Prize either. They made their achievements as people who just happened to be women–not the other way around.

So, Anonymous-Man-Who-Doesn’t-Understand-Women, I suggest you and your buddies stop consulting the great Internet Oracle and instead tune in to an aptly named movie made by the Oracle’s equally disgusting cousin, Mel Gibson, because even though both are lacking in wisdom deserving of the title “oracle,” at least one of them is getting close to what we want: to be taken seriously. 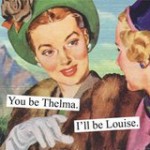 9 replies on “What Women Want”

That was a great link Cinnamon Sunshine! IÂ thoroughlyÂ enjoyed it. I want to print it and give one to every man I know (and everyone woman). You are right that many men want both kind of women rolled into one: a woman who speaks her mind only when told to but remainsÂ opinion-lessÂ at all other times. It’s manipulative and truly a form of gaslighting. I often find the little things I’m being labeled for are often the very things myÂ accuserÂ is afraid to beÂ labeledÂ of.

Ruby, the social conditioning of good men is one thing I hate most because while my guy is very supportive, he does not live in a vacuum. Misogynistic comments like these, when made in abundance, do influence him. I liken it to when I watched the whole series of Big Love in one month and every other word out of my mouth became “Lord knows!” or “Goodness!” or “Ok Boss Lady!” When I’m surrounded by certain language or opinions, I often find myself starting to share them. The same with my guy and your’s it seems. While they are good men who support women, they cannot seem to divorce themselves from the social conditioning they’ve been subject to. Women are indecisive and emotional. Was there every any other description for us? Sadly, women too are subject to this social conditioning, and like the article Cinnamon posted, many of us start believing the stereotype.

I have referred my husband to this article and the one offered by Cinnamon Sunshine to help him understand why I get so frustrated about our communication sometime. Thank you for articulating what I have not been able to!

What I find both so laughable and frustrating about this stereotype is that I’ve encountered more men than women who are cryptic and lack the ability to be straightforward. Not only that, but my previous significant others (with one exception) could not handle it when I was straightforward and honest with them, especially when it came to sex. It seems to me that men say over and over that they want a woman who is upfront and doesn’t fulfill these types of stereotypes, but the moment they meet one many men feel threatened and use misogynistic silencing tactics to shut down any woman who doesn’t fit their idea of what women should be. And that in turn leads to some women perpetuating these stereotypical behaviors and passive aggressiveness as a survival technique. Something else that is also relevant to this is the practice of “gaslighting,” which I think this article explains fairly well:Â http://thecurrentconscience.com/blog/2011/09/12/a-message-to-women-from-a-man-you-are-not-%E2%80%9Ccrazy%E2%80%9D/

I have an ex who made this assumption ALL the time.Â  And I generally tend to be quiet but straightforward in my conversation, and to have a genuine interest in the opinions/needs/thoughts of people I care about, so the fact that he was so reactive to everything I said, justifying it by saying things like “you women never say what you mean” was completely BEYOND me.Â  An extreme example includes my complaining about PMS-related bloating or something similar was interpreted as accusations of me trying to make him think I was pregnant.Â  What.Â  And truly, for someone so convinced of everyone’s (every woman’s) ulterior motives and meanings, he was the most guilty of that kind of behavior.

Yep, men assume women are being passive-aggressive or are playing mind games when really maybe we’re just non-confrontational and don’t really care which movie we’re going to see tonight if the other party actually has an idea.Â  I’ve found though that sometimes you do have to just offer an opinion or choice, even if it’s a lousy one.

Agh. The secret to understanding women is that we are human beings. Not cryptic, cruel sphinx creatures who simultaneously are crafty enough to twist your every word and dumb enough to be distracted by something shiny.

Just you wait. The next Marvel comicbook superheroine is going to be a cryptic, cruel sphynx creature, crafty enough to twist words, dumb enough to be distracted by shinies. And in a crime-fighting bikini.

Because when I know I’m going to be fighting crime, I always go straight for the bikini. Nothing stops bullets like your inner thighs.

This is pretty much the age old age old, isn’t it? Such a fucking pity it even has to be a topic of conversation at all. My dude has every respect for me, and was raised by women, but in his professional sphere he often struggles to take the women he works with seriously; his male coworkers chalk many of their female coworkers’ success up to the presence of breasts, and nothing more. (He does, granted, work with one or two rather unprofessional women and their continued success in their organization considering the quality of work they turn in is disappointing at best, but there are many ladies at his company who are perfectly capable and contribute equally, if not more than the men, in order to be taken seriously.) They work in a field dominated overwhelmingly by men, and he struggles pretty much every time we have this conversation to wrap his head around why his arguments against poor-performing female coworkers don’t need to have anything to do with their femaleness, not because he “hates” women but because every moment of his training in this field was saturated in subtle or overt misogyny. It’s taking time, but he is working hard on excavating that shit from his head.