This piece was originally titled “˜How To Be A Grown-Up’ before I realized that there was no surer way to bite off more than I could chew than to claim to know how to do something which, in the view of traditional sociologists, I am tragically failing at.

In any case, a simple Google search will yield you a plethora of information on the subject. These days, it seems like everyone is trying to tell you how to be a grown-up, including the New York Times. The thing is, there are just as many people out there who seem to be asking the question, painting an online picture of a generation who has forgotten or never learned what it means to be an adult.

Wikipedia, that most venerable of resources, defines an adult as a “human being or living organism that is of relatively mature age, typically associated with sexual maturity and the attainment of reproductive age.” This definition is illustrated with a hilarious black and white photo of a cluster of people staring sombrely at the camera, dressed in the latest fashion of the 1900s, captioned, “A group of adults.” Wikimedia Commons informs me that they were a group of Jewish anarchists in London. I would also add that should the entire human race be wiped out and Earth repopulated by an alien species, they will also be the poster children for human adulthood.

What exactly is this adulthood that always seems to be looming close on the horizon, and indeed resembles the horizon itself in that it’s constantly receding as you approach it?

When I ask that question am I not simply wondering: What does it mean to be a grown-up in today’s world, where many people my age live with their parents or receive financial support from them, are forced by circumstances into unemployment, and are delaying or doing away with marriage altogether? At one time all these things were clear milestone markers that launched you firmly into adulthood, but it’s obvious that just by considering marriage alone, this no longer holds true. What about the percentage of young people who are cohabiting with partners and sharing all the responsibilities and rewards of marriage without actually being married?

Isn’t it time we moved past a traditional view of adulthood?

Furthermore, let’s not forget that the majority of our literature these days is skewed towards the more sober aspects of this purported adult life. We are told to “shoulder our share of the burden,” to “just grow up and face reality” and  to “pay our dues.” Not a single mention that being able to have a stiff drink at the end of a long day is pretty damn fantastic or about the gleeful autonomy of eating a PB & J sandwich for breakfast, lunch and dinner if one so chooses. Is it any wonder that none of us are exactly racing towards this grim picture of the rest of our lives? What are the rewards of this so-called adulthood anyway?

And who ever said that adulthood was defined by financial self-sufficiency? While I’m all for paying your own bills, has anyone copped to the fact that due to something called the rising costs of living and a dearth of jobs added to the black hole of student loans, financial independence is something some of us literally cannot afford? When your parents extend their assistance, or offer to fund your business venture or let you move back into your childhood bedroom, I don’t think it’s a regression or a failure. Empirically speaking, I happen to know many responsible grown-ups who for some reason or other are not financially independent at this point in time. Conversely, I know a few who are and I am sorry to say exhibit no other signs of being grown-up human beings. Admitting you need help seems to me to be very adult indeed.

So given all this, what does it mean to be a grown-up in today’s society?

I think that being grown up is realising and accepting certain fundamental truths about life. Like that it goes up and it goes down and that this is true for everyone. Arrogance is the inability to see this, the inability to grasp the idea that life can take away from you as much as and possibly more than it can give to you. It’s accepting that pain and a certain amount of drudgery is as inevitable as the moments of joy where life lights up incandescently. It’s about being proud of the small things, like always making your bed as well as the big things, like settling down in a new country. It’s about stretching and growing constantly, no matter in what way. What it means to be a grown-up person in a civilized society is to be able and willing to look beyond the immediate particulars of life to what may be unseen but is equally important.

And knowing this, grown-ups engage with life. They talk, they think, they figure things out, they dive into the great collective stream of human thought and dialogue, the back and forth of current ideas of our time, the relevant issues that affect us all. When I was a teenager, growing up in the grubby heat of a Malaysian high school, I always knew I wanted to grow up but in a different way than that which was defined to me as being grown-up. I didn’t care about “facing up to reality” and I still more or less don’t. What I do care about is questioning reality. I seek great conversations, new ideas, questions that will open doors to even more questions.

George Bernard Shaw once said that life isn’t about finding yourself, life is about creating yourself. I think Mr. Shaw would probably have had a thing or two to say on how to be a grown-up. Adulthood is about grasping full responsibility for the task of creating yourself. It’s about acknowledging that the process of becoming a grown-up will always be a work in progress, and that there is a certain beauty in that.

You are going to inhabit the person you become for a long, long time and you’d best make sure that it’s a damned good one. 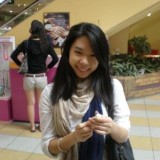 8 replies on “On Being A Grown-Up Human Being”

I think it might be easier to define ‘child’ and ‘adolescent’ than adult. Too often adult is equal to ‘more things you need to do, less things you’re allowed to do’. In my humble, half-way-to-adulthood opinion.

Thanks for the comments guys. Meghan, I agree with you that I could’ve gone further, in fact, this topic is one that is so personally relatable to me that I could go on and on with it but decided to cut myself off. It’s interesting what you said about not having arbitrary standards to meet when it comes to adulthood though cos I do think there are standards, I just think we need to redefine them in a huge way and widen our take on it.

And yes, cake, cake at every meal and peanut butter out of the jar anytime I want it. Ah, the freeeeedom.

I really appreciated this article! I was just at a wedding for a gal I grew up with (we both grew up as conservative-ish baptists) and while I was thrilled to be at her wedding and celebrate the milestone with her, I became very tired of one thing quickly: I was asked when I was getting married about 12 times by members of my parent’s church and told that I should do it soon. I ended up feeling like an old maid, and I am neither old nor *ahem* a maid. Â And while yes, I would like to make that commitment eventually, it is not the only barometer for grown-upness, or my only measure of success as a woman.

I feel like the parameters of being a grown-up are so narrow and rigid that almost none of us fall within them. So clearly it’s time to redefine what being an adult is all about. And my definition involves cake at every meal.

life is short and you might go at any minute. therefore, cake before dinner seems even more responsible of a choice to make.

Yupp I totally agree, it’s all about priorities.

this is a fantastic piece that i will be handing out to my list of people who 1. like myself, are struggling, scared, angry at much of the world we are inheriting and constantly told that we need to “grow up” 2. those who tell us to do so and 3. anyone else.

It goes further even than what you’ve described here, in that the “traditional” markers of adulthood are actually recent, and primarily western or exclusive to 1st world nations. The idea of marriage being a marker of adulthood obviously doesn’t take into account adults who partner and live together but don’t formally recognize it, not to mention LGBT people to whom the privilege of marriage is legally denied in many places, but even partnership being a marker of adulthood erases the experiences of many adults who choose to live alone, or who don’t choose it but are for reasons outside their control single or bereaved of a partner.

And the financial autonomy thing is a crock of shit. For many women, for much of history, working outside the home and owning financial independence was an impossibility, or at least socially discouraged; were they always children until they found jobs? Are stay-at-home moms and dads no longer adults? Are people in cultures in which it is the norm for married people to share a home with one of the couple’s parents? What about rural and indigenous people to whom many concepts of property ownership are different from ours? What about cultures in which the family structure is inherently different and living arrangements are based on that?

I think even your definition, that adulthood is recognizing certain “fundamental truths” about life, is a bit flawed, (though it’s on the right track) because these truths change from person to person, experience to experience, culture to culture, and value system to value system. We have this myth that adulthood means self-actualization, or that it means autonomy, or that it means agency. And for many people, that’s not true. Trying to define adulthood at all means subjecting it to an arbitrary set of standards to meet or fall short of whatever the definition becomes; I’m not comfortable letting anyone else set those standards for me.

(This was a very wordy riff, and I really appreciated your post, Lylim! It just got the ball rolling for other thoughts on the way defining adulthood marginalizes so many people.)