I ran my first race on Saturday, the Hot Chocolate 15k in Chicago. As I dragged myself out of bed at 6:30 in the morning, several hours earlier than my normal Saturday waking time, I swore if I had not shelled out a hefty fee, I would be on my way back to bed, and that I would never again subject myself to rising early on a cold Saturday morning to run. Later, while I and my brother yelled with the shock as we took off long pants and coats to put into gear check, I swore it again before sending my much faster brother to the first start corral, and heading towards my own start location. But as I waited by myself for the race to begin, I started to feel some excitement looking at the women surrounding me.

Last week, Erin Gloria Ryan, a Jezebel blogger and Chicago-area runner herself, wrote a great article about groundbreaking woman runners, like the first woman to run a 5k race in the 60s, and the first woman to register for and run the Boston marathon a few years later. It was an inspiring read in the days leading up to my race. And as I stamped and shivered in the 38 degree Chicago morning, preparing to run 9.3 miles for the first time in my life, I started noticing the women around me. First I noticed the number of women ““ at least as many, if not more, women than men surrounded me. And then I started noticing the women themselves, in pairs or small groups, with boyfriends, alone. Some women wore expensive Lululemon running gear and make-up (clearly women who sweat less than I do), others wore cheap shorts and sweatshirts, others wore shirts declaring what organization they were raising money for or who they were running in honor of. I saw women who were tall and short, fat and skinny, frail and athletic looking, dark-skinned and light-skinned, and everything in between. I heard women speaking English, Spanish, Russian, and at least one other language I could not identify. I was surrounded by every kind of woman, all, like me, preparing to run nearly ten miles on a cold morning.

I had plenty of time to meditate on this, and much more, during my solitary 15 kilometers. I thought about what running means to me. I am not a “good” runner, and running has never come easily to me. I have never had a “runner’s high” or a second wind, I have never plateaued and been able to just keep running indefinitely. I’m not fast. Every step of a run is work for me. But I love running. I enjoy it, it makes me happy, it de-stresses me, it makes me feel strong. So I take every difficult step, and smile at the end of it. And despite the knee problems, sore muscles, and the struggle, running has immeasurably improved my relationship with my body. I no longer see my body as this difficult thing that will never look like or be what I want. I now see something I’m proud of what for what it does. This body ““ which will still never be quite as thin, clear-skinned, or thick-haired as I might like, though that bothers me less now ““ has carried me miles at a time, and I have pushed it through those final few steps over and over again. It has accomplished feats I honestly never imagined it could. Now I look on my body is a powerful, complex, part of me that has made me feel strong, centered, and in control, and has physically taken me beyond what I ever thought I could achieve. As I raced, I wondered what running had done for all those women around me, and I thought of those first groundbreaking women who had made it possible for all of us to be there.

I ran on, surrounded by thousands of men, women, and anonymous supporters cheering on the sidelines. And for the first time as a runner, I hit a plateau. I just kept running, without slowing or stopping for my usual breaks to stretch and catch my breath, for a mile further than I had ever run before. In the end, I beat my goal time ““ 93 minutes, an average speed of 10 minutes per mile ““ by almost two minutes, ending with a pace of 9 minutes, 47 seconds per mile. I smiled broadly as I hobbled to get my things at gear check. I slowly limped away from the race with my amazing brother, who finished at a pace of 7 minutes, 2 seconds per mile, by far his personal best, and I felt victorious. I won my race, as had my sibling next to me, our friends who finished between us, and all the other men and women on the course. I was grateful to the women who made my race running possible, to all my brothers and other runners who inspired me, to the cheering strangers who gave me the extra push I needed, and to my own wonderful body for carrying me through 9.3 miles of Chicago streets in just over an hour and a half. And I am breaking my promise to myself. Someday, not too soon, I will again be dragging myself out of a warm bed at 6:30 on a cold Saturday morning to run. This was my first race, but it definitely will not be my last. 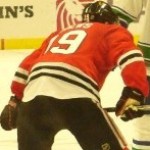 I am an unschooled Unitarian Universalist, feminist, and library science grad student who loves reading, hockey, friends, family, and a variety of nerdy/geeky pursuits. I spend a lot of time dreaming about getting a dog, run as much as my bum knee will allow, and spend too much time watching TV.

6 replies on “Racing Myself”

YESSS Good for you! I’m the same kind of athlete that you are- running is freaking hard and it’s never been a fun thing for me. But racing is the best. I have a race next Sunday!

Thank you!Â  I actually do enjoy running, I’m just not good at it.Â  But racing definitely takes it to a whole new level of awesome.Â  Good luck on Sunday!Â  How long is the race?

Thanks! It’s a smallish local 5k, I’ve not yet done a longer distance. The local races are nice in that I see a lot of the same faces over the year, and then next week they’re doing post-race chili and beer. Love love love.

Beer and chili sounds like an AWESOME end to a race.Â  Enjoy yourself!

“I no longer see my body as this difficult thing that will never look like or be what I want. I now see something I’m proud of what for what itÂ does.” Awesome.

Thanks.Â  I really can’t express enough how much my relationship with my body has improved since I started running, but it’s nice to try and share it a little.