I love Christmas cards. I love receiving them, love checking the return address to see whom they’re from, love opening the pretty envelopes, and I adore reading the personal note each sender took the time to write in their card. Yes, believe it or not, people used to write a personal note on their Christmas cards. Hard to believe, right? This year, out of all the cards we received, over half were unsigned. The sender took the time to buy cards or have picture cards made, took the time to address the envelope and stick a stamp on it, but couldn’t be bothered to include a brief note or to sign the card to identify the sender. If not for the return address, I wouldn’t have known whom half the damn things were from because I know the sender professionally and have never met or seen their kids. This new trend of sending “anonymous” Christmas cards sucks. I could blame social media for this trend, but I appreciate social media too much to make it the scapegoat of bad manners. There. I said it. Sending a Christmas card without a personal note or a signature is bad manners. (I suppose at some point in this post I need to honestly share that I don’t send Christmas cards. I do other things to connect on a personal level. I guess that makes me a total hypocrite. Whatever.)

In the old days, people sent Christmas cards to express affection and to let you know they cared. I’m trying to cast a positive glow on the current trend of sending cards anonymously, but I’m having a tough time putting a positive spin on this trend. Have people stopped signing their cards because a signature and a smidge of personalization takes too much time? Is it because people only send cards because they feel compelled to do so by chains of tradition and are in a hurry to check it off their list? Do people now stay so current on what’s going on in each other’s lives via social media that they don’t feel the need to be social on a Christmas card? Or, on an uglier note, do they no longer bother to sign their cards because sending Christmas cards is no longer about expressing affection and is now solely about bragging and bringing attention to the sender? The impression I’m getting is that sending Christmas cards is now about showing off and has very little to do with any affection for the recipient. We received cards with pictures of new cars, pictures of foreign vacation spots, pictures of new homes, and oodles of pictures of “perfect families” glowing with perfectness. Maybe the truth is that personal notes are no longer shared because personalization requires honesty, and honesty might defy the image presented in the picture.

Don’t get me wrong. I genuinely appreciate the effort, I just don’t see the point. I could live with this if the reason for the lack of personalization was that a busy young mom simply forgot or missed a few, but this is too consistent to be an accident. To send a card without personalizing it is wrong on every level possible. Call me old fashioned, but that’s how I feel. To be bluntly, brutally honest, if you don’t care enough to sign your card and include a personal note, don’t bother sending it. Save yourself the effort. Save the paper. Save the stamp. Just send me positive vibes and maybe shoot me a personal email wishing me a Merry Christmas, Happy Festivus, Serene Solstice, or whatever your personal holiday is. Enough said.

My favorite card this year was received from someone I know is going through extremely rough times. This precious woman spent money she didn’t have on very inexpensive Christmas cards. They weren’t showy and weren’t very pretty, but they were from the heart. She addressed them by hand (no computerized address labels) and delivered them personally to avoid having to buy stamps. She not only signed her card, but she wrote a personal note. The note she wrote was sincere and transparently from the heart. It filled the inside cover and spilled over onto the back of the card. I suspect she took the time to write a personal note of equal length to every person she chose to give a card to. THAT is the spirit of Christmas. Her desire to share her affection was so strong that she gave sacrificially to do so. I display her card in a location where everyone can see it and where just seeing it blesses me on a daily basis. I threw the unsigned cards in the compost heap. Maybe next spring they’ll serve a purpose. 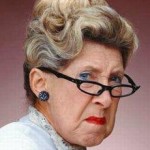 I'm old enough to have learned a lot by doing everything the wrong way. Come along for the ride as I share my wisdom and hopefully make you laugh. Be forewarned that I will also share an occasional rant, so hang on for dear life!

I must confess that I am guilty of this fateful flaw this year.Â  I figure if I got cards out then I got them out, good for me!! I did make my cards with a recent photo of the children so that was personal.Â  Next year I hope to get them done earlier so that I do have the time to write a not to each friend and family member.Â  But have you noticed how you get about half the number you send?

I’ve always sent Christmas cards- traditional cards for many years, the past few years a photo card. We don’t do a newsletter or anything like that- just about every other year I print out a few sentences (either on the back of the card or a separate 1/3 sheet of paper). MOST years, Â I write short personal notes on a lot of them. This year, they were all pre-printed (so that our names are on them), and I didn’t personalized them.

I LOVE getting Christmas cards, and hang them all over the house. I’ve got albums that I keep the photo cards in, and we like the flip through them during Christmas Card season. It’s fun to see how friends and family have grown over the years.

Wait, what? People do this?Â  Every card I got had a note or at least a signature, and I’ve never heard of these impersonal card shenanigans.

I remember a few years ago, myself and many members of a message board I’ve been a member of for years all sent out cards to each other for Christmas, and they all came with the strangest inside jokes written inside.Â  It’s hard to top a cheerful, glittery Christmas card with “We’re about to go HAM!” scrawled on the inside in oversized letters.

Hell, even some of the people I work for sent out cards to 50 some-odd clients and I had to hand-address all of them because the printed label was too impersonal.Â  Not to say I enjoyed it, exactly, but surely it’s a sign that old fashioned Christmas cards still have their place.

I love that people you know virtually sent cards to each other! Many of the cards this year that WERE personalized were from people we know from our online adventures. Interesting that people whom we met via the Internet took the time to share a personal note, but those we know personally did not. Hmmmmmmm ….

I haaaaate Christmas cards. Â I used to only sort of dislike them, but now I hate them. Â I hate the feeling that I should send them because if I don’t, I’m being a bad/lazy human being. Â I hate their impersonal nature (which would be fixed if people put real notes inside, but to be honest – I’d rather just have a letter if people are going to write something personal). Â I hate the feeling of obligation, do I hang them on the wall? Â On the refrigerator? Â On the mantle? Â We live in a one-bedroom apartment and have literally zero storage space, so clutter builds up fast, but throwing away a picture of somebody’s family in santa hats feels so…insensitive. Â I don’t send them because “it’s better for the environment” not to, and “I don’t have enough money to buy stamps,” and “I’m a bad/lazy human being,” but mostly it’s because I get zero joy out of them, and actually, usually I get the opposite.

Oh no … doing anything out of a feeling of obligation is just plain wrong. I applaud you for not doing it! :)

You know, I think that I must just come from my own universe. I have never had an inclination to send Christmas cards (in fact, I often feel resentful when friends or family try to guilt me into it), although I do love receiving them in the mail. I would just much rather update people thoroughly via email or over Facebook, but then again, I have the luxury of being able to contact all of my friends and family through a digital medium. Some do not.

I confess, the big appeal of receiving Christmas cards, for me, is just getting something in the mail. It’s so unusual to receive snail mail that isn’t a bill or an add these days!

I take your point about people not even spending a few seconds to sign their own names on cards. I wonder if the art of the personal touch (via handwriting) is being lost these days altogether?

I buy Christmas cards every year and NEVER send them. I’m dyslexic and I avoid handwriting anything whenever I can, even my own name, which I often misspell. It’sÂ embarrassing.

You are one of the few people I would not be offended at receiving a type-written note from. Dyslexia had not occurred to me as a reason for not signing cards, so please forgive me. However, if the act of sending Christmas cards creates that much angst for you, just don’t do it. Spare yourself the misery!

I recently saw that elementary schools are going to stop teaching cursive because it’s “no longer necessary.” Looks like future CEOs will sign everyone’s checks in block print. Classy.

Kudos to you for not giving into the pressure to conform! Love it!