“We’re pretty sure the cop is a Controller. And I don’t care what you say, Jake, I think Tom is, too. So, here’s the deal. You want to get into this fight against the Yeerks?” Marco asked me. “Fine. Let’s see how much you want to do it when it turns out it’s your own brother you have to destroy.”

That stopped me cold.

“It’s not exactly some video game, is it?” Marco said. “This is reality. You don’t know anything about reality, Jake. Nothing bad has ever really happened to you. You have this perfect family. Like I used to have.”

His voice cracked a little. He never talked about his mom’s death.

I realized he was right. I didn’t know about reality. Not the way reality had happened to Marco–and to Tobias.

“So maybe we just walk away from this,” Marco said. “Let someone else fight this fight. Sorry about the Andalite, but I’ve got enough death in my family.

“No,” I said, surprising myself. “The Andalite gave us the morphing power for a reason. It wasn’t just for the fun of being a dog or a horse or a bird. He hoped we would fight.”

“Then maybe Tom is the enemy,” Marco said. “Maybe it’s your own brother you’ll end up destroying.”

Because, see, Animorphs sounds really, really stupid, right? Teenage kids get the ability to change into animals for two hours, and are tasked to fight mind-controlling slug aliens called Yeerks. But oh, you guys, I’m not even ashamed of my love for this series, because of the themes, and the seriousness of the stories.

I was thinking, the other day, about how the themes in Animorphs are so applicable, so useful, are so real for teenagers in any age: the deep-seated fear that the world around us is a lie, the horror at realizing that violence and darkness permeate even the brightest corners of our lives, the worry that we cannot protect or hide our loved ones from the worst aspects of our lives and our world.

That theme, that first one, though, the way that the kids in this series have to doubt everyone around them, have to assume the worst and hope for the best, have to pretend that they don’t know that the people they trusted and loved are in fact gone: it’s heartbreaking, and it’s terrifying, and it’s so, so true. Because when I was reading Animorphs (from about age 10 to 2001, when the series ended), I was learning that lesson: that the people I loved were not always who I’d believed they were, that there was darkness and betrayal and secrecy and danger in places I would never have suspected.

Then there are the mundane moments, where Marco’s dealing with his mom’s death and his dad’s depression, and then with his dad moving on and dating someone new. There’s Rachel, simultaneously terrified of and exhilarated by her transformation into this badass, warrior-bloodlust, vicious being, trying so hard to still hold on to the “normal” girl she used to be. There’s Cassie, who’s always, always struggling with the ethical side of their issue, whose kind and decent nature gets tested and broken and rebuilt and tested again. There’s Jake, who’s pinning every hope he has on saving his brother, who never, ever feels like he’s good enough, who never really accepts that his actions save the world even as they doom the people he loves. There’s Ax, in the shadow of his brother, alone and afraid and isolated and doing everything he can to stay himself even as he’s having to change to survive. There’s Tobias, my Tobias, who lost his whole family and lost them again, who lost his body and his mind and got them back, who’s a huge cosmic joke and a lynchpin of reality and a bird and a boy and a broken not-even-exactly-human being anymore.

And for me, even beyond the stories (which hold up, amazingly, aside from the occasionally-stilted prose and the ’90s tendency to age really, really poorly),Animorphs was my first fandom. I wrote fanfic, I collected the books, I watched the (horrible) television adaptation, I wrote long impassioned essays about it. I fell in love, in a way I never really had before. I’ve always loved to read, and to imagine myself in a fictional world, but Animorphs was the first time I found a place where I could create, too, where I had stringent beliefs and opinions and ideas about the series, where I felt invested to that extent. It had never happened to me before, and I honestly think it opened a door for me, making me into the fan I am today.

Because look at that quote again. Look at it. This is a series for kids, with a stupid-sounding concept. Think about the instant maple and ginger oatmeal episode (for whatever reason, it makes Yeerks not need their life-sustaining rays, making them nearly-impossible to kill, but it also drives them and their hosts insane), where the team has to decide: do we take advantage of this, and drive many of these Yeerks insane and end any hope of rescuing their hosts, or do we let them stay, and hope that during their vulnerable moments we can rescue the people? Think about Krayak and the Ellimist, these two nigh-omnipotent beings, using people and worlds as chess pieces, and how the team has to fight to remain themselves instead of becoming just tools of one or the other. Think about the David arc, where they bring another kid into the team and then are forced to get rid of him–and they don’t, like, write him out, oh no, no, Cassie tricks him into morphing mouse and traps him in a bottle on an isolated island forever, because she can’t kill him but she can’t let him live, either. Think about when Jake accidentally becomes a Controller and we get an extended sequence as the Yeerk in his head starves to death because the team traps him.

And that’s the point of this Origin Story, the first of 2012: we look at modern works like Hunger Games as something new, as if there weren’t books talking about violence and death and war for kids before. And we look at the paranormal romance trend, and the superhero trend, and we forget about the older series that, while not necessarily well written or adapted, were dealing with this stuff, too. Origin Stories are back, baby, because we have things we need to talk about.

Origin Stories is an ongoing series over at Sara P’s blog, The World is Yours, where she is accepting submissions for further entries in this series. 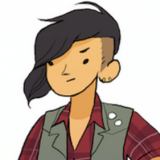 That last comment was supposed to be in reply to marthamydear. Stupid phone, never does what I want it to.

I loved the show too, though watching it now would probably ruin my good memories of it.

These were some of the first books that really roped me in as a kid- I’d always been a big reader, but this was one of the first series to hook me. I never finished them, but my now-boyfriend not only collected them all, but downloaded the entirety in PDF and reread them over the year he was in teacher’s college. Then told me all about it.

And I LOVED the short-lived TV show- nothing beats either of the Ashmore twins on TV.

Ax and the cinnamon buns!Â I freaking love the Animorphs, and you give a great analysis of the series’ value. I’ve always been impressed with the author’s ability to create distinctive personalities and narrative styles in all of the characters, especially compared to some other YA series I read at the time (I’m looking at you, Ann M. Martin).

I’m a zoologist now and looking back at the series, Applegate really knew her stuff. The detail she put into the sensory and physical experience of turning into another animal was what drew me into that world the most – hell, it helped inspire me to study animals from an early age. Now I want to re-read all the books.

You are the only other person I have ever met who felt about Animorphs the way that I did. I remember thinking to myself as a teen that these books said things and talked about issues that other teen books seemed too afraid to consider.

This was an inspiring post. It brought back all those memories!

And HOW AWFUL was that TV show? I mean, I watched every episode, but still!

This series was my absolute favourite as a kid. Thanks for reminding me. I wonder if I could find the series somewhere? I would love to read them again.

I tend to find them at used bookstores, Goodwill, etc. — the series is also being reissued with new covers that I frankly loathe, but it does mean they’re coming back into bookstores! There are also numerous…less than legal means (they’re all online in PDF at a couple places).

Since they were mass produced paperbacks, there is a glut on the used market–you can pick them all up on Amazon or PaperbackSwap for just the cost of shipping. Or check your parent’s attic–I know all my copies are still out there.

If you prefer your ebooks by legal means, they are also releasing kindle editions of the books with the new cover version. They run about 5 dollars each. Of course, that is only the first few, and they are very quick reads.

Animorphs might not be something I continued to read as I grew older, but it was my first fandom as well. It introduced me to fanfiction and to another way of being a fan that made much more sense to me.

It broke my heart over and over again (oh god, the ending), and yet I kept on reading. Because even though it was bleak it still had heart and bravery to weigh up for it, and I like to think I got some of that bravery too.

And the bleakness, too, because (like most of my favorite YA) it’s bleak as anything “grown-ups” would read, but it offered hope, too. Even in the face of that ending, there was a base of belief in the power of individuals to make a difference, the belief that if we work hard good can triumph over evil, the belief that humanity, with all its issues and problems and failures, is still worth fighting for. I think that’s something good YA does really well, is balance the bleakness of reality (even if doing so involves mind-controlling slugs and shapeshifting kids) with the hope of humanism.

Thanks so much for commenting!