Skip to the content
Editor’s Note: Rude and Not Ginger is graciously hosting the 2012 Oscar liveblog! Everybody jump in and comment, b/c she’s awesome.
Another Editor’s note: R&NG is having trouble getting on the site, because the site is being a giant asshole. I don’t have a TV in my office, so I’d be a really shitty commenter on the Oscars, keep talking among yourselves while I hit some shit with a hammer.
Hey guys! Rude and Not Ginger here. Selena seems to have gotten things working for me just in time. I wasn’t able to actually live blog most of the red carpet, but here’s a summary of what I think so far:
And now for the awards themselves!
8:31: Time for the obligatory Morgan Freeman introduction and Billy Crystal opening spoof of nominated films.
8:33: BIEBER! Why?
8:34: Princess Bride reference makes up for Bieber.
8:40: I haven’t seen The Descendants yet, but my favorite review of it came from my 87-year-old grandmother, who went to see it because she likes George Clooney: “I couldn’t believe some of the language they used!”, accompanied by disapproving look.
8:48: So do we think Hugo is going to sweep a bunch of technical awards? I haven’t seen it either, but it looks beautiful from the trailer and clips I’ve seen. I was kind of hoping for a Tree of Life cinematography win, though.
8:51: BRET MCKENZIE SIGHTING. You guys, I will be so excited if Bret from Flight of the Conchords wins an Oscar.
9:01: I’m curious about this movie Brad Pitt saw as a little kid.
9:06: I love Sandra Bullock, but I still can’t get over the fact that she won an Oscar. For The freaking Blind Side.
9:10: I will never get used to hearing Christian Bale’s real accent.
9:14: Congratulations to Octavia Spencer! The Help was problematic, to say the least, but she is wonderful.
9:20: This is mildly amusing (Hey Jennifer Coolidge!), but oh boy is this show going to run long.
9:24: I actually do like these mini-interviews with the technical award nominees.
9:25: I was hoping Drive would win that one, just because it was its only nomination. But I don’t know anything about sound editing.
9:28: Yep, Hugo is going to win All The Things.
9:34: Ladies and gentlemen,  we have Muppets!
9:40: Christopher Plummer looks like he would really like people to stop reminding everyone that he’s 82. I don’t blame him.
9:44: A very nice speech from the makers of The Undefeated. Including the night’s first f-bomb.
9:46: I didn’t see Kung Fu Panda 2, but I was rooting for it a bit because it was the first major animated film directed solely by a woman (can you believe that?!)
9:57: Emma Stone is quite charming.
10:01: CHRISTOPHER PLUMMER. He’s long overdue, and was absolutely wonderful in Beginners. Great movie. And he always gives kick-ass acceptance speeches.
10:10: And now the part where everyone takes a bathroom break.
10:14: I missed Penelope on the red carpet. Love her dress.
10:17: YES! Man or Muppet! So great. I really wish they had let the Muppets perform. Bret, you’ve got it going on.
10:26: I’m rooting for The Descendants because it was co-written by the guy who plays the dean on Community.
10:28: And Dean Pelton is an Oscar winner! It’s a good night for stars of cult sitcoms.
10:32: Woody Allen. Meh. I enjoyed Midnight in Paris, but I liked Bridesmaids a hell of a lot more.
10:38: Yay for the bridesmaids! All looking lovely, and all hilarious.
10:43: The father-daughter winners were sweet. I always feel bad for not seeing any of the short film nominees.
10:52: I can’t get over the fact that the young woman from The Secret Life of the American Teenager starred in such a well-received film. Good for her, because TSLotAT is TERRIBLE.
10:54: Michel Hazanavicius wins Best Director for The Artist, thanks Uggie the dog.
10:56: Meryl remembered her glasses this time! Her dress is also gorgeous.
11:09 Esperanza Spalding did a great job during the In Memoriam segment. I’m glad you no longer hear the clapping during that one, because that always felt insensitive when one person got more applause than someone else.
11:16: Jean Dujardin has such expressive eyebrows. And Cumberbatch sighting in Oldman’s clip!
11:21: Dujardin wins Best Actor, continues to be handsome and charming. We’re in the home stretch, but these things are definitely going to run over time.
11:24: Crystal really has been painfully unfunny (and frequently offensive).
11:27: Oh, I love Colin Firth’s Mamma Mia references to Meryl Streep.
11:29: Meryl wins! I was really expecting it to go to Viola.
11:35: Say what you will about The Iron Lady, but Meryl gives a damn fine acceptance speech.
11:37: To absolutely no one’s surprise, The Artist wins Best Picture. And Uggie gets to come on stage.
Well that’s it! Thanks for letting me live blog and sorry for the technical difficulties. P-Mag readers are the only people I’d want to talk to about this ridiculousness. Good night! 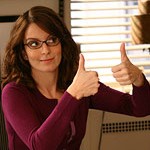 By Rude And Not Ginger

Meryl was my commencement speaker! I love her entire life and haven’t seen the Iron Lady yet, but will, and speak to her in my head like we’re best friends. Because we are, even if she doesn’t know it yet.

I really thought The Help would do better than it did from it’s showing at the SAGS.

I really loved the design of the title cards and the memorium tonight. /slightly random

Oh! And it was all done by The Mill, who obsessive Doctor Who fans will recognize as the visual effects company they use. Neat!

Is this thing still going on? Geez..

I totally thought it was going to be Viola.

Ok, I’ma gonna rant a little here. The Shore was a decent film but not really my favorite of the live action shorts. It was clever but it had pacing problems. Time Freak and Tuba Atlantic were both far better films. Tighter editing, funnier writing, better.

And The Fantastic Flying Books of Mr. Morris Lessmore wins Best Animated Short?!? No. Just No. The opening is a trite rip of Wizard of Oz, the second act of the film MADE NO GODDAMN SENSE, and on the whole the thing was moronically over sentimental. Bad film was bad. AHHHUGH. Wild Life was a little to “film festival fodder” for my liking, but it was better than Flying Books. And Dimanche/Sunday was excellent all around. Even the Pixar entry was better and I don’t root for Pixar on principal (because they don’t need festival exposure to get their films seen).

Thanks for giving us your opinion! I always wish I knew more about the short films.

The Detroit Film Theater always shows the live action and animated short film nominees each year, and I always go to see them. I graduated with an animation degree though, so I have a vested interest.

Also, I know you can get Time Freak and Tuba Atlantic off iTunes (fer like $2 each). Possibly some of the other short films as well? Raju was the only one of the live actions films I didn’t enjoy. So I recommend hunting them down if you have the time/interest.

I wish I knew more about short films too!!! Â Opifex, do you know how I might be able to watch some of these? Â I always liked the shorts they put in the Pixar films, but those are the only ones I’ve had exposure to.

It looks like iTunes has put together a packet of them for purchase, also I think some cable on demand services might have them (I think mine does anyway)

The Live Action ShortsÂ (Edit: Never-mind Pentecost is in there, my reading comprehension sucks)

Interesting! I haven’t seen any of the short films so I couldn’t really judge.

I loved The Shore. It helped that I love Ciaran Hinds. I had no problems with the pacing, but I did think the tone was uneven…a couple of attempts at comic relief that should have been left out. I would have been happy if Time Freak had won too…I had thought that exact thing about time travel before. The Tuba one left me flat, though Mr. Donovan and our buddy both thought it was the best.

I reeally loved the flying books one. I’m glad it won. I don’t remember the story. I just loved the way it looked. It was stunning. I actually hated Dimanche/Sunday. But neither of us liked Raju, so there’s that!

Dimanche/Sunday reminded me so much of trips out to the middle of nowhere northern Michigan to stay with my Grandfather. Being the only kid in a sea of grownups who talk about hunting, tractors, and cooking and nothing else. Also the sort ofÂ bizarreÂ relationship with death in that sort of setting. It was spot on for that weird northern humor. Tuba Atlantic was humorous to me for many of the same reasons.

I really like to see a very clean tight edit on short films, and Flying Books just didn’t even come close. The opening was longer than necessary (also not wild about the tornado/Wizard of Oz bit), and the Busby Berkley flying book dance thing in the middle was confusing. Then we come to the end, which I predicted about halfway through the film. I think La Luna was equally visually stunning, and had better writing and editing.

And as for The Shore I think it just took them too long to get to the point were they explain how the two groups of characters were connected. The horse chase had me about splitting a seam from laughing so hard though. I’m not really upset about it winning, it just wasn’t my pick.

So I’m guessing the J Lo nip-slip is the reason she and Cameron Diaz were doing that “back to the crowd, look over your shoulder” thing when they were presenting?

No, it was part of a joke that flopped.

Hoarder. But yeah, enunciation was lacking.

No, it was “hoarder” (for all the awards she has). I checked my DVR, because I definitely thought he said “whore” as well.

Oh thank god. I feel so much better.

Damn. Â We’ll I’m not sure hoarder is much better…as a matter of fact, we can now add ableism to the list.

It is doing little for the anger tonight.

I am trying to think about ponies until I feel less wrath towards humanity, which I realize makes little sense. I feel slightly warmer towards centaurs now, though.

The douchebaggery knows no bounds tonight.