Last week, the Computer History Museum in Mountain View hosted the fifth annual Women 2.0 PITCH Conference. PITCH is a conference for women in tech to gather and mingle and learn from one another. Developers chat with venture capitalists, designers schmooze with product managers, and start-up founders hand out business cards like there’s no tomorrow.

The Women 2.0 crew pulled in the big guns for the thousand attendees, recruiting the founders and CEOs of some of the biggest start-ups in the world as speakers and panelists. These women waxed poetic – literally, Caterina Fake of Flickr recited some Wallace Stevens – about humanizing vs. dehumanizing technology, bootstrapping strategies, and influencing company culture from the top down. Here are a few pearls of wisdom, but follow them yourself to hear it straight from the source:

Robin Chase (@rmchase) – Founder of Zipcar: “Build companies people write love notes to.” The mom of three founded Zipcar in Boston with a mere $75,000 and a single car. More than any of the myriad of Zipcar accomplishments, Chase was pleased as punch to share literal love notes her customers send to the company. Build products that inspire fan devotion, and you know you’re on the right track.

Sheila Lirio Marcelo (@smarcelo) – Founder and CEO of Care.com: “Collect people,” was the oft-repeated mantra of Care.com founder. She advised aspiring entrepreneurs to work their networks with regular coffee dates, one-on-one dinners, and frequent check-ins. Don’t focus on business all the time, and make sure your mentors, sponsors, and partners know you’re invested in them as people, not just as resources. A coffee date that doesn’t end with someone writing a check doesn’t mean it wasn’t a successful connection.

Katie Mitic  ““ Director of Platform and Mobile Marketing at Facebook: “When you build a new product, it’s your baby, and it’s hard to push a less than perfect baby out into the world.” But, as Mitic pointed out, the only way you get real-world reactions to your product is just put it out there, imperfections and all. Do people like it? Are you on the right track? Ship early, ship often, and constantly iterate.

Caterina Fake (@caterina) ““ Co-Founder of Flickr: Conventional start-up wisdom these days says that the most successful companies are ones that cater to people’s weaknesses. The seven deadly sins are a sure bet for success (just think about how much of the internet is dedicated to lust). There’s another way, explained Fake, and that is to focus on humanizing technology that connects people. Build something that brings people closer together (like, for instance, a photo sharing site), instead of pushing them further apart.

Deena Varshavskaya (Wanelo.com) spoke about simplicity, Leah Busque (TaskRabbit.com) was on hand to discuss proof points, and Cathy Edwards (Chomp.com) reiterated the importance of detail-oriented product management. And those are only the big names! So much of the PITCH value was driven by the solo entrepreneurs just getting their companies off the ground. Tricia Rampe is extending access to fine art at GetArtUp, while Morgan First is bringing wine-tasting to the 20-something set with Second Glass.

Women 2.0 is about connecting the Caterina Fakes of the world with the Tricia Rampes. It’s about getting female run start-ups resources and access in a traditionally male industry. It’s about reminding everyone at PITCH that tech does not have to be a lonely place for the ladies. If you want to get involved with Women 2.0, check out Founder Fridays in your city, sign up for the newsletter, and follow them on Twitter (@women2). 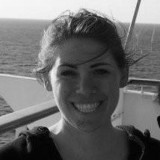 Emily Heist Moss is New Englander in love with Chicago, where she works at a tech start-up. She blogs every day at Rosie Says, and writes regular features for The Good Men Project about dating, relationships, sex and gender. She has also been featured on Jezebel and The Frisky. You can reach her at sayhitorosie@gmail.com. Find her on Twitter @rosiesaysblog.

Whenever I read stuff like this, I feel motivated but also let down by my brain that I haven’t found the 21th century version of sliced bread yet.