War is ugly. Most of us learn that lesson fairly early in life as wars are played out on our television screens. I grew up with the daily Vietnam death counts. My children’s reality was a big sign on a neighborhood street proclaiming the number of Iraqi deaths that week. War is ugly. There is no getting around it, but sometimes we humans turn barbaric.

We’ve been told, time and again, that war is necessary. And yet, great minds, past and present, tell us this is not so”¦ Jesus, Buddha, Martin Luther King, Jr., Mother Teresa, the Dalai Lama, Desmond Tutu, Nelson Mandela, Gandhi.

Why, then, do suicide bombers continue to take the lives of innocents? Why do soldiers come home with tales of babies being used as bait? Why do our own soldiers pose gleefully for pictures as they hold up body parts of the “enemy?”

We are born as innocents, in need of sustenance and tender care. In the constant struggle of nature versus nurture, we evolve. But what will nurture us along the way?

We see child soldiers, ripped from the wombs of their families, atrocities committed around them, by them, on a daily basis. We see families in fear for their lives, daily sustenance and safety a constant question. We see women living in terror, even their own relatives a threat to their security. And we see soldiers, young men and women full of ideals, ready to serve God and country, who see things beyond what any human should see. Their souls are torn from their bodies. Their minds are broken. Their will to survive twists into something unbelievable, despicable, frightening.

My stepdad served in two wars. He was in both World War II and Korea. We did not know he was in WWII until after he died. He never told us. It was that ugly. He could not speak of the ugliness. He kept it from his children. How he held it inside, I will never know. He was a wise, good and kind man. How? I don’t know that, either. And when I was in high school, a man from Japan came to live with us, as he and several co-workers came to learn an American business. Daddy welcomed him into our home with friendship and hospitality.

War is ugly. It tears out your soul and wreaks havoc with all that you are. Peace is stronger. It takes more work to achieve, but once we are there, it mends the soul, mends the brokenhearted, mends the rifts that have been torn asunder.

I shall be clinging to my love beads and standing vigil with those who stand for peace. Where will you be? 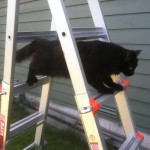 Still seeking a world of peace & justice, this minister, mate, and mom - an ordained minister in the Christian Church (Disciples of Christ), finds great happiness and God's presence in many places: from sandy beaches to the top of a Teton, soup kitchens to used bookstores. Tamalyn embraces the philosophy that "Life is Good," but we have much work to do.

My grandfather was in D-Day. He didn’t start speaking about it until two years ago. He’s 94 and cried when he spoke of it. The experience was still that real, and still hurt that badly.

I set up a program a few years ago where we had a former Marine who served the entire Iwo Jima campaign in WWII. He, too, hadn’t started talking about it until recently, and he, too, cried while talking about his experiences – he was still a large, burly man covered in Marine corp tattoos, but he cried openly. He was a flamethrower, and he said it was his job to fire his flamethrower into the Japanese tunnels “until the screams stopped.” He said that he still had nightmares about it. This was last year.

I’m not a pacifist. I went to college with many, many pacifists, and while I admire their idealism and wish that I could share their worldview, I cannot. Â I believe that war should be absolutely the last, last, last resort, when all other forms of diplomacy and communication have utterly failed, and when there is no viable alternative that would still allow people to live freely. The trouble is, I think we rush to war over very little, and people end up dying for the ideals of their government. I hate it. I hate everything about it.

Like the survivors of the concentrations camps, we need to hear their stories before they are no longer with us. I’m so glad that your grandfather is now willing to speak of his experiences. It’s so important for us to learn from him, from the Marine who spoke at your program, and others like them. Only then will we learn not to rush into war over so little. Only then will we remember that it must be a last resort. Unfortunately, we’ve stopped listening to their wisdom and we’ve forgotten the nightmares and the wisdom of the past. Those voices must be raised again.

We won’t have peace until humans decide to quit oppressing one another, quit hoarding resources, quit denying one another basic human rights, etc.

I’m sharing your cynicism. Hubby and I participated in a Holocaust Remembrance March, yesterday. We didn’t think there could possibly be anything controversial about our participation in such an event. We don’t know of any Holocaust deniers in our community. But, as it turns out, the promoters of the event were mainly Messianic Jews and Chabad Jews whose values are quite different from our own. As some of the speakers were talking, we cringed, wondering if the God who listened, if those we honored, were cringing as well. As we gathered in hopes of peace, in memories of horrors beyond belief; horrors caused because of classism, racism, oppression, and the need for homogeneity, these groups of people seem, to me, to be so superior to “the rest of us”. Sigh. Where is the hope for peace? If not in a gathering such as that, then where?

Ah, and there’s my rant for the day, as I long for peace and a change in human nature!

You’re welcome. And I do believe there are times we must take a stand. I’m not a pacifist. I guess I’m a wannabe pacifist! I want to live in a world of doves, but the hawks keep swooping in. So, I will keep working and speaking for peace, because I believe that deep in our core, we need security. We all need security for ourselves and our loved ones.

I’ll be with you, Tamalyn.

Side by side, arm in arm.