Before we get into the gymnasts, here is a quick look at our athletes, and we’ll find out who is going to London.

In soccer, Britain fans may be bummed to learn that Beckham won’t be featured in 2012 Olympics. At least your team is in.  The U.S. men’s soccer team was knocked out of the running for the Olympics back in March, but our women’s team is still in it!  They defeated Canada on their way to the Olympics.

Track and Field: Lashinda Demus ran the fastest time in the 400m hurdles. She set herself up as a gold medal threat. Jeneba Tarmoh and Allyson Felix got the special honor of running a tiebreaker Monday, July 2nd. Both finished in a dead heat for the third position in 100m hurdles. What’s an Olympic trial without a bit of drama? Canada’s team keeps taking shape. 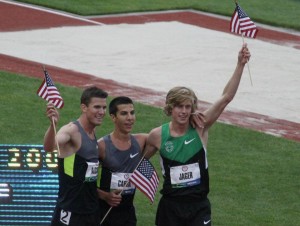 Swimming: No surprise that Michael Phelps definitely gained a spot in London! He has qualified for eight events. Ryan Lochte has earned his spot as well, watch for the tight competition between he and Phelps. Dara continues to impress, gaining the title “ageless.”  She sits in prime position to obtain her Olympic berth. More finals take place on July 2nd.

Gymnastics: The U.S. team for gymnastics in London has been determined. There is a lot of hype and a lot of expectations put on these girls. The rumor is that they could bring home the gold, making it only the second U.S. team gold. I guess every athlete needs to participate with the goal of gold in mind. An athlete can never go in to competition thinking you will lose. The only team gold was won by the magnificent seven in 1996.

The five girls representing the United States are: Gabby Douglas, McKayla Maroney, Aly Raisman, Kyla Ross, and Jordyn Wieber. The women will complete in uneven bars, balance beam, floor, and vault. They will also do a women’s team all around and an individual all around.

Jake Dalton, Jonathan Horton, Danell Leyva, Sam Mikulak, and John Orozco will particpate for the men’s 2012 U.S. gymnastics team.  Sam Mikulak helped win the bronze in Beijing. Horton made the team after ripping his foot in competition two months ago. The men’s team has not won gold since 1984 and has the U.S. hopes pinned around their necks. The team now heads off for intense training and team building before heading to London. The men will compete in parallel bars, pommel horse, rings, vault, and high bar. They will also do a men’s team all around and an individual all around.

So found out that Jeneba refused to run the tie breaker so Allyson will get the Olympic spot.

I may or may not have spent all afternoon watching the women’s gymnastics trials- holy cow those 5 ladies are badasses! Also, I now want Gabby Douglas to be my friend.

Someone from my hometown missed the men’s track 1500 by one spot. :(

Bummer, so close!Â  Hopefully he is young enough to try again in four years.