1. a magic spell <the girls appeared to be under a glamour – Llewelyn Powys>

1720, Scottish, “magic, enchantment” (especially in phrase to cast the glamor), a variant of Scottish gramarye “magic, enchantment, spell,” alteration of English grammar (q.v.) with a medieval sense of “any sort of scholarship, especially occult learning.” Popularized by the writings of Sir Walter Scott (1771-1832). Sense of “magical beauty, alluring charm” first recorded 1840. As a verb, by 1830s, from the noun.

We live in a society obsessed with the cult of celebrity.  This culture is wholly based on the idea of, fascination with and promulgation of glamour. Whether it be the cosmetics industry or Wall Street, nearly every industry in our post-modern world is about getting and attaining glamour. This culture is a house of cards built on something that doesn’t even exist. Glamour is something vampires use to make mortals think they did not see something that they did. Inversely, the culture of celebrity uses glamour to make you see something that is not there. It is just a sleight of hand and a trick of the eye. Glamour does not exist in this dimension. So next time you feel badly about yourself because someone else’s life seems more glamorous than your own, remember that what you are seeing does not exist. You are only seeing what the other person wants you to see. 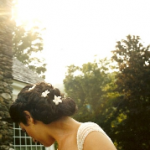 Ms. Kerr writes creative non-fiction and focuses on post modern feminist thought and esoteric philosophy. Her writing is further characterized by metaphysical connections and transcendental thought. Through etymology (study of word orgin), epistemology (study of knowledge) and metaphysics (study of nature of being), she hunts through the past to explain the present and gleam the future.

8 replies on “The Etymology of “Glamour””

Also, it (or the Korean pronunciation of it – “geullaemuh”) has come to mean “big-breasted” in Korea. Â Actually, I would like to know how that happened, as well.

Probably because the Koreans were looking at American movie stars and understood that in order to be glamorous, they had to have large (and very often) fake breasts. Â Thus, big boobs must be glamorous!

No idea, but the same run true in Japanese if I remember correctly. Or at least with the type of dolls I collect (mostly made in Korea and Japan) “glamour model” is short hand for “this doll’s tits are oversized to the point of absurdity.’

“Glamour” is related to “grammar”?

AHHHHHHHHH WHAT IS HAPPENING

That’s all I have. Sorry.

This reminds me of a Terry Pratchett quote:

Elves are wonderful. They provoke wonder.

Elves are marvelous. They cause marvels.

Elves are fantastic. They create fantasies.

Elves are glamorous. They project glamour.

Elves are enchanting. They weave enchantment.

Elves are terrific. They beget terror.

The thing about words is that meanings can twist just like a snake, and if you want to find snakes look for them behind words that have changed their meaning.

No one ever said elves are nice.