This is it, Persephoneers! Ice creamy Judgment Day!

Well, Judgment Weekend, really, because voting is open until Sunday 11:59 p.m. EDT (or thereabouts). But whatever, semantics.
Yesterday was a freakin’ rout: Vanilla 27% v. Cookies & Cream 74%

So it comes to this: Mint Chocolate Chip v. Cookies & Cream

You all know by now what your friendly, arm-twisting bracketmaster is voting and rooting for; guess who else goes for the mint? 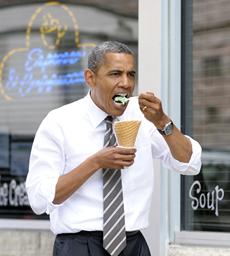 I’ve got Barack on my side; do you feel as strongly? Can you sway the masses? Do I need to resort to hypnotism/autocracy, or will poorly-penned haikus suffice?

Now, one can argue for a compromise here, and I will admit that it is a very appealing one:

This is some tasty shit (and, as you can see, kosher!). But aside from this very specific take, WHO SHOULD OUR WINNER BE? My friends, it is in your hands.

A parting idea for you to ponder as you cast your final vote: What would your personal ice cream championship look like? Mine would likely be a three-way, courtesy of a breathtaking ice cream experience in the Berkshires a few years back: Mint Chocolate Chip (of course), either Breyers or Philadelphia-style (i.e. no eggs, as opposed to French-style custard ice cream) homemade/small batch; Ben & Jerry’s Coffee Heath Bar Crunch or its equivalent; and what was sold to me as Mexicali Chocolate, chocolate ice cream made with cinnamon, cayenne, and mint. I recreated the latter in brownies, but of course it is not nearly as marvelous as the ice cream version, where the icy creaminess is the perfect foil to the spikiness of the cinnamon and the heat of the cayenne, heightened by the background notes of peppermint. Place all three of these ice creams in front of me, and I might pass out from sheer delight.

What would make it to your championship?

22 replies on “I SCREAM, YOU SCREAM, WE ALL SCREAM FOR THE ICE CREAM CHAMPIONSHIP!”

Cookies and Cream! Because 1) I know an awesome 14-year-old whose derby name is Cookies N Scream, and 2) mint will always taste like the dentist, and even the most delicious chocolate chips cannot mask that foul flavour.

Can’t agree with you on mintiness, obviously… but Cookies N Scream is a fantastic derby name!

The juniors come up with the best derby names. And they tend to be food related.

Mint chocolate chip! And I’ll definitely have to look for that Ben & Jerry’s. Yum.

VERY worthwhile. Now, be careful, because a few years ago they started making Mint Chocolate Chunk as well, which is pointless–the chunks are too big to mesh well with the mint, and it’s still not as good a mint as Breyers. But the Cookie version is an absolutely lovely treat, even if I get it less to take care of mint ice cream cravings than cookie ice cream cravings.

Mint chip! (Even the tofutti version of it is super tasty!!)

I think the Tofutti ice cream sandwiches I had once were MCC–tasty stuff!

These are my top two flavors but the clear winner is the only one currently in my freezer: Mint Chip!!

Minty minty minty mint! LADIES LADIES AND ALL GOOD PEOPLE OF THE WORLD I implore you to consider voting Mint Choc Chip because I already KNOW its the champion and it deserves to be recognised! Could anything be tastier than chocolate and mint? No friends the answer is no.

Though I do mightily now want to make cookies with chocolate,Â cinnamon, cayenne, and mint. My mouth is watering now hahaha.

The combo is really marvelous. It’s different when it’s not in ice cream, of course–you don’t have the heat contrast, and cream is really the ideal texture for it. But it’s delicious whatever it’s in!

As soon as I saw the two finalists, I thought of the B & J flavor immediately. The compromise is one of my favorites! But if I have to choose, I’ll go with mint chocolate chip. The cold mintiness, the smooth chocolate, the way you can hold a bite in your mouth until the ice cream melts, leaving you with a mouthful of chocolate that slowly melts and covers your tongue in deep, rich, cocoa-y goodness… there’s just no competition.

Edit: this was supposed to be in reply to nonsensikel further down… Apparently I can’t click in the right place today.

Whatever, who cares where it ended up? It is sheer poetry! And correct, obviously ;)

And reading your response made me super hungry for MCC. Yum.

Ugh. I will keep my mint in my tea and my chocolate next to it and that’s the end of it, thanks very much.

I want to vote for the compromise. That B&J ice cream is amazing. :)

But since I can’t, I’ll go with mint chocolate chip.

It is marvelous with the cookies texture, but I honestly find it a bit too sweet. Not overly sweet, like the artifically flavored candy-esque versions, but definitely moreso than the Breyers.

I stand with Barack!

MINT CHOCOLATE CHIP ALL THE WAY!!!

I don’t understand how cookies and cream can even be here.

People really like it… I mean, okay, I do too! I’m pretty sure I voted for it in at least one round! But the absence of anything coffee is hurting my heart.

If I was offered ice cream and the only choice was cookies and cream, I would gladly eat it. After all, it is ice cream. However, just about any other flavor is better than C&C (assuming quality equivalence).