There is a theme these days in Republican hype, one that seems to be taken at face value by millions of people, and yet has no basis in reality. It is this: Democrats (specifically Obama) want to take everything that you have earned and pass it around to people who do nothing. It’s not a take-from-the-rich-give-to-the-poor mentality, it’s a take-from-you-and-give-to-somebody-else-who-doesn’t-deserve-it idea, where “you” means…everybody. Everybody. Rich people, middle class people, that girl from my high school who doesn’t work and is on unemployment and food stamps, Mitt Romney, students, farmers, everybody. And the people that the government is giving the money to? Nobody that you know or like, of course. Mythical lazy poor greedy assholes, whom you will never actually encounter in real life because they are too busy filling up swimming pools with their welfare checks and practicing their butterfly stroke amongst other people’s money.

That one’s been floating around for awhile, but there’s another that has recently come across my feed with the same general idea:

There are all sorts of problems with both of these crapdates, but what I really want to focus on is this wrongheaded belief that the Republican party is trying to sell to…everyone. Isn’t this the age of Nigerian Prince scams and Snopes and a built-in level of skepticism? Aren’t we all supposed to think critically about anything that seems too good to be true? Aren’t we?

Because it is too good to be true. If Democrats take from everybody and give to [insert mythical lazy greedy loser here], nobody would be a Democrat. Right? I mean, even Jesus would think twice before just giving up everything to somebody so ridiculously undeserving. Intervention has taught me that enablers are The Worst. Why then does anybody oppose the Republicans?

Well, in part, because this propaganda is just not true.

“A 2008 poll of 1,400 Americans by the Cornell Survey Research Institute found that when people were asked whether they had ‘ever used a government social program,’  57 percent said they had not. Respondents were then asked whether they had availed themselves of any of 21 different federal policies, including Social Security, unemployment insurance, the home-mortgage-interest deduction and student loans. It turned out that 94 percent of those who had denied using programs had benefited from at least one; the average respondent had used four.”

It’s not that the government is taking from everyyou and giving to undeservingjerk. It’s that the government is taking from everybody and giving to everybody, and a large recipient of that is you. But if people were to believe that, of course they wouldn’t vote Republican! They need those student loans and that home-mortgage-interest deduction! But we can surely get rid of the “entitlements,” right? Because those go to lazy greedy assholes who are laughing all the way to the bank?

“Using the 2010 federal budget and U.S. Census data , the CBPP finds that 53 percent of all government entitlements are going to people who are over 65 years old. Another 20 percent of the benefits went to disabled people, while 18 percent were going to people in a working household. The data was for the government’s 2010 fiscal year. That means that 9 percent of entitlements went to people who were not elderly, disabled or living in a household in which someone had worked at least 1,000 hours in a year.”

Oh. It’s going to your grandma. Or the woman who escaped a violent marriage and is now working minimum wage to support two kids. Or your friend’s sister who is paraplegic.

Suddenly, those memes about getting to keep every cent of what you earn seem a lot more…selfish. And cruel. And sickening.

But wait! cries a tiny voice from the back, the die-hard Republican. I’ll give some money to those people who have shitty circumstances through no fault of their own (I mean, unless you want to blame Grandma for not figuring out how to freeze time), but why do we have to give so much?

“The overall effective federal tax rate (the ratio of federal taxes to household income) was 20.7 percent in 2006, with the highest quintile of American households paying 25.8 percent of their income in federal taxes.”

“Surprise! Despite endless American complaints about over-taxation, the U.S. has one of the world’s lowest marginal income tax rates, at 27%. Along with what, by comparison with the high rates cited above, seems a relatively low rate, the U.S. has the world’s biggest economy, with a GDP of over $1,400 billion.”

“The table below shows total taxes, including state and local government taxes, as a share of G.D.P. in 2008, the latest year for which there is complete data. The table makes clear that the United States has very low taxes by international standards. 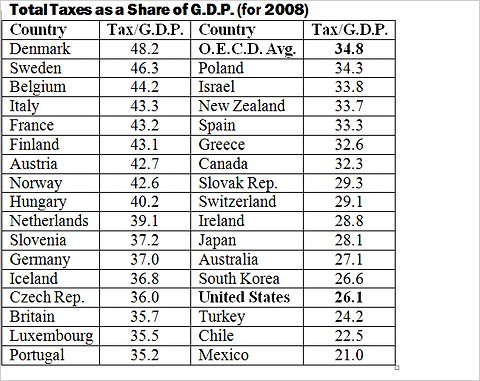 Organization for Economic Cooperation and Development”
The fact of the matter is that our taxes are quite low. The other fact of the matter is that the vast majority of us get direct tax benefits from the government, and those that do not are benefiting from schools, roads, police coverage, etc. And the other other fact of the matter is that even those who are getting the “entitlements” are just the opposite of what Republican conventional wisdom would have us to believe: they aren’t lazy or greedy, they are elderly, sick, and often working hard but unable to overcome crappy circumstances.
So this theme – this idea that Democrats are taking from everyyou and giving to undeserving jerk – it’s just wrong. And Republicans know that it’s wrong. And they spread this crap anyway, because if you twist the facts in just the right way, their platform seems a lot more awesome. But if you have to twist the facts to make people believe in your platform, the answer is not to twist the facts, but to change the platform.

11 replies on “Takedown: Democrats want to take my money”

I haven’t seen either of these- again, I appreciate my facebook friends. Thank you for the break down of who programs serve to help- I’ve wondered that and have been too lazy to look it up. I don’t know anyone terminally unemployed by choice who’s content to take a meager government subsidy and not look for the alternative.

What gets my goat the worst is these very same Republicans would rather choke on their tongues than admit to the sheer amount of entitlements BigÂ BusinessÂ and Wall Street get.

But let’s all shit on the homeless dude! It’s not like he has reasons why he can’t work, or afford a place to live, right? He’s got to be just a lazy fucking bum!

But Republicans are Such Good Christians. Never heard of some Samaritan dude? Sharing with the lesser fortunate? Just a thought.

I can at least (grudgingly) respect non-religious Republicans; one of my coworkers is very much a Republican and very much an atheist, and puts time and energy into helping animals in need. He’s honest about being selfish, and basically believes that people get out of the world proportionately to what they put in. I disagree with that (the whole “privilege” concept is lost on him, and he doesn’t believe that non-white-heterosexual-males start out at a different point than he did), but I can at least respect that he’s honest with himself.

Religious Republicans piss me right off, because most follow belief systems that focus on teachings like “love your neighbor” — to me, that implies actually making sure one’s neighbor is fed and clothed and educated and safe. Not shouting Bible verses at them and rambling on about bootstraps and having tantrums about taxes and dismissing someone’s real concerns because they’re a distraction from the feel-good concert at church. Not playing favorites or requiring church attendance before someone’s needs are met, just meeting them.

Long story short, I can deal with non-religious Republicans much more graciously than religious hypocrites. Especially those who claim to follow a very kind, loving, generous person/figure/mythological being and then act in complete opposition of his teachings (and claim that it makes them more right). If someone’s honest about being selfish, I can respect their honesty. I don’t put a lot of stock in following a religion as a sign that someone is a Good Person anymore.

It floors me how much the conversation about welfare in the US gets hijacked by this shit.

That’s not to say it surprises me, though, since so much of it is fueled by racial politics.Â Of course, you can’t say that in mainstream media. Cause then you’re just playing the race card. But it’s totally okay to talk about the “Welfare Queen.” The mythical black woman who keeps having kids so she can get more money out of the system without working (you know, because obviously having a bunch of kids and being their sole provider isn’t work!)

And it’s always so ‘sneakily’ put as a black woman too (because they’re always at least women), who are out ‘taking government money’ while sitting around on their butts yet have iPhones and can ‘afford to get their nails did’ (this is where is becomes obvious that they just might be trying to make it about a black woman) and their ‘weave did’ (there it is) and…. ffs. Apparently we should just get AT&T and the beauty salons to stop taking all of those food stamps! </sarcasm>

I know this is completely irrational, but it drives me CRAZY when people put Lego. It’s LEGO! Aaahhh!Â (I know this wasn’t you and was just how the meme/image was done, but I still cringe).

As to the actual point here… eh, I tend to stay out of these sorts of discussions because they are far more nuanced than the talking points on either side ever make them out to be. But I can say that, in my personal experience, no one on any side of anything ever ‘knows’ that they are wrong :)

I will wish all the people reposting this meme eternal stepping on LEGO though.

Exactly. And in the $50 story, the little girl probably would have been happy to earn $50 and give $10 (a.k.a 20%!) to the homeless guy to help him. But that would be, I dunno, an actually apt analogy instead of ignorant fearmongering.

“Her parents still aren’t speaking to me” is probably because he’s an idiot and a jerk, not because he’s giving the wrong kind of life lessons to their daughter.

Alienating your friends is something only jerks are proud of. Just saying.