A few days ago, a report came up on The Mary Sue relating to certain sellers on Etsy.com having their accounts suspended or blocked because they sold the hand knit “Jayne Cobb” style cap from the (un-aired) Firefly episode. Other sellers were reporting getting Cease & Desist letters from FOX regarding their selling hand-made knit caps. As many things on the Internet do, news spread around the “Browncoat” (Firefly/Serenity fans) forums and sites, and a lot of attention was turned back on a show cancelled by FOX more than a decade ago.

When my late husband and I first began to date, we had already established at our first “meeting” of each other what big Browncoats we both were. Though we had intended to be watching the new season (3) of the BBC show Robin Hood, we ended up mostly speaking for hours on episodes of Firefly or how wonderful it was the fans brought about getting support for Serenity to be made.

That was in 2008. I had been to a previous showing of Can’t Stop the Serenity ; a wonderful benefit for Equality Now  that was enjoyable not merely for the film, but for the camaraderie of the fans who watched it with me. By the time summer of  ’08 had come, my husband (nicknamed early on by me as “Wash“) and I were more than casually dating and he invited to take me to our local showing of CSTS that summer. That was the end of June. We both excitedly did what a majority of the Firefly/Browncoat fans did, and cosplayed. That first year I went as River Tam and he as one of the “Two by Two/Hands of Blue” agents. That was the year he also picked up a little brown wristband that simply said, “Can’t Stop the Signal.”

He also received one other small thing. As we had been dating/courting for a few months then and we knew ahead that we would be attending CSTS together, I had decided to complete my first ever knitting project and make a “Jayne Cobb” style hat. I had no set pattern for it, just a copy of the DVDs and a very understanding pause button. I worked on my evenings, weekends, and lunch breaks to finish the hat in time for the show, which was late June. (Even knowing he was going to cosplay as a different character.)

I will never forget how his face lit up when he saw it, and even more when he realized it was for him. That I had made him a “Cunning Cap.” I think he was pretty happy. This photo from 2008.

We both took turns playing with it for a long time, and enjoying a small quasi-tangible link to what was our favorite show. Serenity was the movie we chose to watch on our first date, sitting in a packed living room he shared with 2 to 3 other roommates. He was my Wash, and I his Zoe. We even bothered our poor cat to some degree by making her wear the cap. Yes, I am holding a lightsaber. I am comfortable enough in my own geekery to accept more than one space fiction love. This is also my most serious “fearless” face.

The hat became to us much more than a love token, or a symbol of our beloved show. In 2009, my husband was diagnosed after two emergency brain surgeries with a terminal brain cancer. For him, the quote from the episode featuring the Jayne Cap become his almost daily mantra.

My husband ran. Then for a long time he crawled. When the cancer took more and more of him, it was our friends, and our Browncoat friends who helped to carry us both. To care, to help, to carry.

I understand there are a lot of questions and animosity going around right now bouncing between the FOX owned IP  (the Intellectual Property or the rights FOX owns for the artistic use of Firefly and Serenity; which is a debatable area in some ways), the “Helper Monkeys” at ThinkGeek, and the many single person-owned shops at Etsy who have been making Jayne Cobb Cunning Caps by hand for years and years  to sell to the Browncoats who adore, love, and desire one, but for whatever reason were unable to do so themselves.

The way I see it, FOX-owned IP is making money off this venture, absolutely. Especially with the surge of “geek culture” becoming more acceptable and mainstream public. I know ThinkGeek is making some money as well*, but as they are a business with more than one employee, they do also have to play by legal rules and acquire the “rights” to a knitted cap design to be made to quality specs by another company: Riddle Junction. Not knowing too much copyright law myself, the only real comment about Riddle Junction I can make is that they are a third party given the license by FOX to manufacture the knit caps then sold by ThinkGeek. TG is now in a sad position of angering some of the very fans they felt they were trying to include. Etsy shops that have been shut down are suffering – and by no means were these large-scale operations bringing in “big bucks” – mostly female-owned self-businesses covering costs of materials and shipping for other Browncoats. One such shop run by a wonderful woman named K. (who wishes to remain anonymous in the hopes her shop can be reopened) makes many geek-themed items (among them from Doctor Who, Firefly, Battlestar Galactica and more) but did not herself make any of the knit caps or list any on her Etsy page. She only had other items such as bookmarks or buttons on top of her own artwork that she always listed as “inspired by [name of show].” Yet, because she used keywords relating to the show, her Etsy shop has been suspended. She also disclosed to me that the money she makes off her Etsy store goes to buying groceries.

What I have witnessed over the last few days on the Internet is a lot of anger, frustration, sadness, and some hate. So, who is really “winning” with this? By a monetary standpoint, I’d say FOX is coming out ahead. From a publicity standpoint, I think many larger issues are now being brought into light, how intellectual copyright law is applied, how certain sellers are suffering and if a knit cap with no set pattern (other than a tricolor shading, a pom on top, and ear flaps”¦ which sounds like any of these hats that can be found with a simple Google search) is limited merely in name. What my hope for the other Browncoats out there is to have a discussion; how can a specific fandom deal with IP/copyright laws; and what, if any, responsibility to the fandom does the company that is kept (in part) in business due to the loyalty of fans have?

All I personally know is that since my husband passed away last fall, there is only one person in the world I would consider passing along my Wash’s Jayne cap – to his most adored television show writer: Jane Espenson.

FOX may or may not consider that cap part of their IP (since I made it myself from no set or bought pattern, and did not sell it myself) but it means ever so much more to me. *EDITED: As of 11:30am on April 10th, 2013, ThinkGeek announced through their online media they will be donating the profits/proceeds of the Jayne Caps from Riddle Junction to Can’t Stop The Serenity. While I personally think this is a massive step in the right direction, the larger issue of using questionable legal tactics to put (even temporarily) artists and fans out of business is an issue FOX and all other studios should be considering and talking about. Since it was the fans, the Browncoats, who helped to push the cancelled show into a follow-up movie years later, the power of a fan-base is a strong one. With respect to the original artist’s work, the fans who love and admire the show and who wish for some tangible connection to it are the ones who now suffer. The individual artists who lovingly and with care hand-make these tangible items, most slightly different from another, and most an homage to an item they love, are now the ones who pay a high price.

ThinkGeek heard the fans and responded timely and in a charitable way that some Mudders must approve of; perhaps now we and other Browncoats can petition Etsy that doing the proper thing is human, important, and matters. 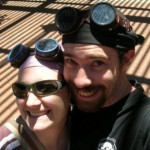 I feel like Firefly/Serenity/Joss Whedon did something bad to Fox in a previous life, because otherwise WTF was Fox thinking?

*Laughs* You might be correct! I think it all purely comes down to money. Joss has MUCH more name recognition now than he did ten years ago, or even 20. Popularity creates a desire, and FOX is very very, very good at making money off things people desire.

Maybe it’s not Skynet we have to worry about…

Fox is being cheapass about it. Although they’re (probably) in the right. They could have gone at it in a whole other way. Tell ‘m to drop names, add Â® or whatever. Come on, it’s Etsy.

Legally they (FOX) does have legal ownership of the IP and can license it out to whoever they want/whoever pays…. now why they waited literally over 10 years to do this… well, that’s where FOX fails ethically.

This was wonderfuly written. Oh man.

Thank you. Shame it had to be written at all.