I resisted the urge to write pet “tails” in the title, so I hope you all appreciate my restraint.

Today I want to know about your pets. Maybe not the ones you have right at this minute, if you have any, but the pets who have a special place in your heart. Tell me about your favorite pet – it’s ok, I won’t let any of your other furry friends know if they don’t make the top spot.

Right now, my family has three dogs – they’re wonderful animals, if a bit challenging at times, but if I was going to name my absolute favorite dog I’ve ever had, it would be my long deceased rottie mix, Cheyenne. We adopted Cheyenne after some guys abandoned her at the local frat house, on the occasion of my husband’s graduation from college. She was a tremendous dog – loyal, smart, and gentle with small children, although she was dog aggressive. I have a very embarrassing story about taking her for a walk that involved her getting in a fight with not only a three-legged stray but also a seeing eye dog within a handful of blocks.  When my cat had a litter of kittens, Cheyenne adored them and we used to find the kittens out of the nesting box, in the middle of the floor soaking wet because Cheyenne had been grooming them. When MiniBelle was born, Cheyenne was her constant, patient companion – the kind of dog that people make movies about.

We have two Basset Hounds-Gershwin and Schubert (why, yes, we ARE music-nerds, why do you ask?). Schubert is large for standard at 60 pounds, but Gershwin is HUGE-90 pounds and four and a half feet from tip to tip. We’re fairly sure that one day there will be a slow-motion car accident caused by people gawking at them on their walks. Fortunately for our neighborhood’s cars, their walk styles are so different that they are usually walked separately. Gershwin is very anti-social, which is a bummer because he’s so magnificent that everyone wants to talk to him but he can’t handle the stimulation. Schubert believes that he was put on this earth to be adored by all beings.

We also have an indoor-outdoor cat named Tommy. We might have two cats named Tommy, but we’re not sure. There’s definitely a doppelganger Tommy living in the neighborhood, and I caught that one hanging around our front door. I could only tell the difference because of the collar.

That’s Gershwin…this is Schubert. They picked up the whole “sleeping on the back couch cushions” thing from the cat. Schu started doing it as a puppy, and it was so cute that we didn’t stop it. Now we have 150 pounds of Basset permanently deforming our cushions…

I got Artemis, the Most Wonderful Cat In The World, when I was a junior in college and living in my own apartment for the first time. She was a wee tiny kitten, and she hated everyone but me.

Artemis shared all the major events in my life with me. College graduation, first jobs, grad school, promotions, heartbreaks, deaths, lay-offs, marriage, etc. She always sat on my lap when I worked on the computer, and she was my constant companion in the first year of P-mag.

When she was 19, in 2011, a year to the day after my mom died, she got very sick, and I took her to the emergency vet in the middle of the night. There was nothing anyone could do to even make her comfortable, so I had to let her go.

I still can’t look at pictures, but I have her favorite toy next to my bed. I love all my kitties, and would do anything for them, but I’ve never had a bond with a pet like I did with Artemis. I tried to write a post about her, right after she died, and I could never make myself do it without ugly sobbing. Sorta like I’m doing now.

My cat when I was a baby was named Alice. I don’t really remember her, but my mom tells stories of who when I was born, she was jealous of me, so she would lay across the doorway to my bedroom and swipe at me, essentially trapping me in my room.

My current pet, Buffy, is my love. She cuddles with me when I have insomnia, which really helps to sooth me to sleep. I think she knows because she doesn’t normally cuddle with me when I’m sleeping okay.

We’re mostly a dog family. After a traumatizing experience with a cat when I was eight I held my distance until I met a friend who had five cats, one of them a HUGE human-lover who wouldn’t take my “No, not my lap please no what is it doing with its claws” as a hint to get even closer. Aww Taz, may she rest in peace.

Right now we have Kia Ora (welcome/hallo in Maori), half Beagle, half German Shepherd/Rottweiler. She’s a goof and very cuddly, which I love. 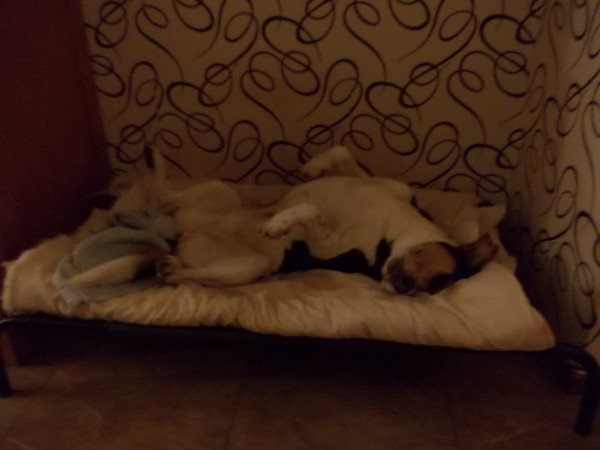 Two pets immediately spring to mind: Maggie, the dog we had from when I was 11 until I was 25. She was such a good dog. A blue heeler/Australian shephard mix, she’d try and herd everyone, which was funny. She had one brown eye and one blue eye with a brown spot in it, and she was born with a little nub for a tail. If you dropped the leash while walking her, she’d sit down and look at you like, “What’s your deal?” (Whereas my dog right now would be like “PEACE OUT! SEE YOU IN ABOUT 20 MINUTES!”) She house-trained herself and would play fetch with herself if she got bored.

She was always concerned about our safety, but it would manifest in funny ways: Like, if we were kids swinging at the park, she would be nervous about us being up high, so her solution was to try and pull us off the swing mid-air. Same if we were riding bikes — “Bikes! Danger! I yank you off by your ankles!”

My other favorite pet was my deceased kitty Lucy. She was a cranky long-haired Siamese who demanded lots and lots of pets, was always chatty, and her bratty demeanor, I found endearing. She was tiny too, even full grown.

Once I had a house guest that she didn’t like sleeping on “her” couch, and she also disliked the plant I had, so her solution to both was to push the plant into the guest’s bags. I repotted that plant so many times. Or, she would jump up and dig her claws into the wall and hang there at eye-level, so when people came around the corner, she’d be staring at them. It was funny, but we did have to re-plaster the wall and break her of the habit with the plastic tips on her claws, which mostly did the trick.

My grandma, who can’t remember a lot of things these days, STILL talks about the time she sat in “Lucy’s” chair, and Lucy came walking into the room and gave her this look like, “LADY, I DON’T KNOW WHO YOU THINK YOU ARE.”

But she was lovable and awesome, and so was Maggie. I miss them both. My current dog, Penny, is a delightful-yet-daffy lab and she’s great, but it’s not the same.

My family had dogs most of my childhood, but then I left for college and immediately got into cats and sugar gliders. At this point my fiance and I have three cats [Missy, the fat queen of the roost; Luna, the skinny skittish rescue; and Byrd, the attention whore asshole.] and fourteen sugar gliders. It’s quite the zoo over here.

Ranger was our very first dog, the runt of a litter retrieved from under a trailer after the owner told my father that he was just going to let them freeze to death that night so that he didn’t have to drown them. Dad took the runt that nobody else would take to save him. Ranger hated everyone but us. In fact, we often told people not to touch him, because if you ignored him, he’d ignore you. People tried to pet him anyway. It was always a mistake. He was Cujo.

But for a dog that went his own way and wasn’t cuddly or playful, every time I was upset, he would always come sit next to me and let me cuddle him anyway. When my father had a heart attack when I was 12, when I came home ferociously homesick from college, when my heart got good and broken for the first time, Ranger put up with me. And he was not happy unless we were all home. In fact, if you were gone for more than a day, he would purposefully ignore you for at least three hours, just so you knew what he thought of you.

He died at fourteen, the summer after I graduated from college. He’d been slowing down a lot, sleeping most of the day for awhile, but waited until we were all at home. Literally half an hour after my father got home from work, I looked up from the dinner table and realized what had happened. Examining his behavior later, we realized he’d been having small heart attacks all day long and had managed to get to the living room so that he could see people walking through the door. Our 30 pound vicious watchdog to the very end.

Aaaand, I wrote far too much. I miss him, even though we have big, goofy sweetheart dogs now. Ranger was my best friend when I was little.

I feel the need to offer you an internet hug after reading all that.

Thanks. I kind of needed an Internet hug after writing that. :)

I needed an internet hug after reading it, goodness.

Awww. What a good boy.

So I’m totally bawling right now, and you need to come sit next to me so we can eat cheesecake and hug and look at pictures of Ranger.