Paige “Rampaige” Halsey Warren is most well-known for her webcomic series, Busty Girl Comics. The comics make light of issues those of us who are bustier tend to deal with, and since it’s creation in January of 2012, it’s hit home with a lot of women. Though the series ended in December of 2012, the comic archive is still available, and you can also find all 3 volumes of the series available on createspace.

The ladies in my family are a large-chested bunch and we tend to make sarcastic jokes about the problems it can cause. I’m also in the habit of drawing situations when they frustrate me, much to the annoyance of a few of my teachers. After the realization that every cute t-shirt design I was eyeing would distort and stretch oddly if I actually got it, a late night online shopping spree quickly turned into a comic about big boobs. I posted it on my personal tumblr and it got the best reception of anything else I’d ever posted. When I realized there was a sea of kindred spirits out there, I set to work making more comics.

Though originating as a personal frustration, the comics have been become a banner for busty ladies everywhere. More than 6 months after the final post of the series, Busty Girl Comics still make their way around social media sites regularly. Paige explains this as originally unintentional, but welcome:

At first my goal was to just get my frustrations off my chest (badum-chtss) but eventually it became clear to me that the comics were helping people find confidence in their own skin, giving people the motivation to change their bodies to how they would be more comfortable, or educating people on body types that were out of their experience and what that entailed. Eventually, I really just wanted my viewers to enjoy the comics and their matter-of-fact content however it related to them, whether they related to it personally, saw their friend or family members’ experiences in the comics, or just thought they were funny even if they couldn’t relate. For the most part, I’d say mission accomplished.

But as Paige found out, with fame comes negative feedback:

I got a lot of backlash for a lot of the comics I posted (and even just for the fact that I was making them). In general, I make an effort to stay informed of topics outside of my personal experience and if/when I’ve made a mistake because of my ignorance on a topic, I made a point to apologize and repair the mistake as much as I could so it wouldn’t perpetuate ignorance.

That said, a lot of the backlash I got was because people were angry that my comics vented about something that I “should just be grateful to have” or because my definition of busty is so open. Occasionally the backlash was sexual harassment that was followed up by people who demanded, “what did you expect when you post a comic like this!?” or “you’re just insecure”. This sort of backlash is the same kind busty people get every day and getting messages like that only cemented my resolved to make comics for the people who relate to the comics and those who were willing to be taught by them.

Though the series is over, Paige is not the type of person comfortable resting on her laurels. She has quite a few projects in the works:

I’m co-writing an animated series about time-traveling kids. I’m developing a long-form webcomic about an alternative 1957 with airships and political unrest. And, I’m developing a strip webcomic about 6 20-something artists renting studio space in a warehouse together. That last project, I should absolutely add, is called “AHTspace” and will be premiering August 1, 2013.

With so many projects going at once, burnout is a very real possibility, and something that many comic artists deal with. Paige has a few simple tips to avoid it:

Setting little goals for yourself (work 1 hour a day on your comic, post at least once a week, attend some “making comics” panels at the next convention you go to, things like that) can make a world of difference. You learn a lot about your strengths and shortcomings as a comic artist in the process and it’ll surprise you how quickly the urge to work will snowball.

For those of you inspired by her work, Paige also had some advice for comic hopefuls:

It’s very important to know that you aren’t the first person to make a webcomic: you don’t have to reinvent the wheel. Connect to the artists whose work you admire and ask them how they got started, what site they use for their ads, how they handle merchandise, things like that. It can be daunting to keep working when you keep hitting walls like website design and self-publishing but a lot of us have been through it and (I don’t want to speak for everyone but) it’s been my experience that many of us like to talk about what we’ve learned along the way.

Though Busty Girl Comics is now behind her, Paige still had a message for all her loyal fans:

I’d really just like to thank all my readers once again for coming by every day to read my comics and for being a wonderful, supportive community for one another. I’m really excited for my next comic project and I hope the BGC readers will drop by once it starts.

All images copyright Paige Halsey Warren and used with permission. 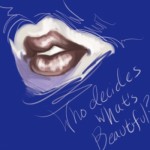 3 replies on “Interview with the Artist: Rampaige”

I followed busty girl comics when it was coming out, and I was so sad the day of the last post. I love her work, and I’m so glad she’s making more fantastic comics.

I know the work of this artist, ha!

To be honest, Busty Girl Problems always makes me feel a little jealous :) I still appreciate it, though, and I especially like how much diversity it shows.