Every now and then, a movie catch phrase comes along that both works perfectly in context, and comes in handy in real life. “Toto, I’ve a feeling we aren’t in Kansas anymore,” “Frankly, my dear, I don’t give a damn,” and “I’m mad as hell and I’m not going to take it anymore!” come to mind (as well as almost every line from Blazing Saddles, although most of those can’t be quoted without a detailed explanation and a PG-13 warning).

One of my personal favorites is from The Princess Bride, when Inigo Montoya hears his boss say “inconceivable” and comments, “You keep using that word. I do not think it means what you think it means.” (I’m the adult child of a former English teacher, meaning I cringe when I see misused words and grammatical mistakes, although I agree, “ending a sentence with a preposition is something up with which I will not put” is a little awkward.) So I was delighted to see that meme pop up in connection with the latest flap over Duck Dynasty, with family patriarch Phil Robertson being quoted in GQ (yeah, rednecks and GQ seem like an odd pairing to me, too!), expressing some colorfully homophobic and clueless, if not racist, views. (Insisting African-Americans were happy during the Jim Crow era because “they were always singing but they weren’t singing the blues” makes me wonder if the guy’d ever heard of Paula Deen. But I digress.)

Of course, the biggest shocker to me was that anyone was shocked — did A&E really expect that a family of Louisiana evangelical duck-hunters would have enlightened views on race relations or gay rights? It brings to mind another of my favorite film lines, when Claude Rains is trying to impress the Nazis in Casablanca by saying, “I’m shocked, shocked to find that gambling is going on in here” right before a dealer says, “Your winnings, sir.” But in their reactions, A&E and conservative politicians seem trying to outdo each other with cluelessness.

I find Mr. Robertson’s remarks offensive — but I find a lot of things offensive about reality TV, and I’m not so crazy about the whole idea of hunting defenseless little ducks. But Mr. Robertson has a right to express his views, as repugnant (or weird — read the actual article!) as they are, and likewise, his employers at A&E have a right to hire, fire, and suspend whomever they like. A&E announced a brief suspension, apparently trying to appease the large gay and black audience for the show (??), but opening up a huge can of worms in the process. Conservative politicians and peripheral-but-trying-to-stay-in-the-spotlight-characters declared their outrage that the media was censoring a good Christian and depriving him of his fundamental right of free speech. Ignoring, of course, the fact that no one’s right of free speech was infringed, because the Bill of Rights says nothing about anyone’s right to star on a reality television program.

One of the stupidest things about this is that the whole duck hunter thing is just a show as well.

I mean, this was them a few years ago 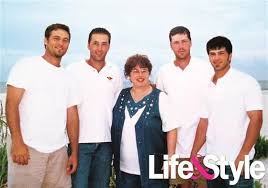 Now racism and sexism doesn’t come with long beards, but I think it shows how eager they are to do things for attention.

I’ve never watched Duck Dynasty, but they look like a bunch of white hicks? So, I can’t say I was surprised to learn that their apparent patriarch is racist and heterosexist. I was surprised to see people really trying to defend him on his “right of free speech.” I’m not a constitutional scholar, but I do know that a privately owned company has no obligation to offer this guy a platform or a job. SO. Meh.

People (especially white dudes) seem to forget that while we are guaranteed freedom of speech, we are not guaranteed “freedom to speak poorly of a group I disagree with, and then be free from any possible negative consequences.” Sure, you can speak out about how being gay is a terrible sin, and how the Civil Rights Movement didn’t make life better for Black people, but then you don’t get to play the victim when someone calls you a bigot and you have to deal with the fallout of those statements. Ugh, sorry, rant over now.

Funny how the people who love to yell out First Amendment (or second) never read the whole thing.