So I know everyone’s been waiting with bated breath for Slay Belle’s weekly Buffy recap but unfortunately said Slay Belle has been up to her eyeballs in work the last few weeks and will be unable to visit the Scoobies or her TV boyfriend Spike until next Friday. I, her teenaged daughter, jokingly said last night while she was working and stressing and drinking maybe her fourth cup of tea [or whatever was in that mug – ed.] that I should just do her post for her. Maybe I could even do the True Blood recap she was unable to do earlier this week, I chortled, thinking about the demographic of mature adults and literary critics that she writes for regularly. Okay, she said, it’s due tomorrow.

Disclaimer: I have seen very few episodes of True Blood. I have, in fact, seen one episode of True Blood and that was this one. I do have a pretty good grasp on the central characters and concepts from Tumblr, because no one on my dash has any interest in age-appropriate tv programs, but I never actually sat down to watch the show. A few years ago I asked my mother if I could watch it with her and her response was some approximation of this expression:

So I didn’t. Joke’s on her, because several years later she would wish I had some sort of knowledge base to write this ill-advised post for her.

After a probably useful (but disorienting for me) “previously on” sequence, Season 7 opens to a gruesome but completely unsurprising bloodbath. The infected vampires that the internet informed me of, their uninfected kin and the humans who their uninfected kin are not very good at protecting are having a brawl under the conveniently ominous red lantern mood lighting of the human-vampire mixer. Going in, I had assumed the Hep-V vampires would follow the typical movie monster thumb rule — the less you see of a monster, the scarier it is — but nope, they are right up in your face, biting it, scratching it and generally killing you. They’re clearly enough of a threat to get the humans and vampires together, which even I know is huge since (as I learned from the kick-ass opening sequence) God hates fangs, but they’re not “possibly lurking in every shadow scary,” they’re “oh fuck I’m being eaten right this second as you watch in horror” scary. The fighting is a really hectic montage of characters I don’t know fighting each other. They should really consider being more accommodating to people who start watching in the seventh season. Sookie Stackhouse, the only character I know anything significant about, is cornered by one of the infected vamps until her boyfriend rips his throat out. Tara’s mom refuses to run to safety, for some reason, forcing Tara to fight to protect her. She loses, and everyone in the town thinks this is the permanent kind of lose. We, the viewers, are given no such definitive pile of red, goopy movie magic and are less convinced. The mayor, who I would have trouble distinguishing from the other sullen-looking white dudes on the show if everyone didn’t constantly refer to him as the mayor, shepherds [hahaha, cause he’s a dog, get it? – ed.] all of the survivors to safety and the Hep-V vampires zip away with a few choice humans.

Inside, the remnants of the vampire-human prom are all thinking nasty thoughts about Sookie and how her slut ways have doomed everyone in the town because everyone knows that nothing bad happens to girls who just keep their legs closed. We know this because Sookie is listening to everyone’s thoughts and of course everyone is thinking about her. I find the strength of this contempt more impressive than anything because I’m pretty sure my thoughts would just be unintelligible screaming.

Luckily a few people aren’t thinking about Sookie because someone needs to get the town’s shit collectively together. A couple of key community protectors split into pairs to search for the infected nest. Jessica calls her boyfriend’s flip phone on her flip phone which probably means they are outdated technology soulmates. Some lanky dude confronts the mayor and the mayor seems really indignant that anyone would think addressing the fact that he turns into a fucking dog is important. The Sheriff (I think) leaves the vampire who ate two of his daughters to protect his remaining daughter, leaving said daughter with a stern warning not to let her in the house, meaning, of course, that she’ll be in the house by the end of the episode. Sookie slips out without a vampire escort, which one notices despite the fact that everyone’s thinking about her. Tara’s mom protests her vampire chaperone’s suggestion that she drink her blood to heal exactly once before agreeing.

Elsewhere, a blonde who I actually don’t know is in Morocco playing Russian Roulette. She says her name is Go Fuck Yourself, which I have absolutely no grounds to dispute. She’s on some sort of quest to find someone, and seems like a pretty Negative Nelly from her whole circle-jerking gods spiel. She wins unsurprisingly, her opponent is carried out in a bucket and she gets the information she wants from some dude.

The Sheriff’s daughter whose name I don’t know has a sort of heart-to-heart with Jessica. There are a lot of vampire-human heart-to-hearts in this episode but this one’s the most guarded. From the safety of her window, our cable-knit sweater-clad human asks about her appetite, her intentions, her boyfriend. With Jessica posed in the foreground, her face smeared with bloody tears, the line “I should hate you” is a little heart wrenching if you haven’t actually seen the episode where Jessica eats her sisters, which I haven’t. Their soul-baring is cut short when, surprise!, “wild infected appeared” and Jessica has to square off against him. Woo! A fight!

A lot of stuff happens to people I don’t know much about. Sookie argues with her boyfriend about being careless, a different Stackhouse, his vampire bff and a group of vigilantes have a sort of argument which is basically two dudes bumping their chests together and going “bro! BRO!!” until Violet bares her fangs and Lafayette and his draft dodging vampire friend talk about vampire friend’s draft dodging and get high together. Jason, the second Stackhouse, confronts Violet about his manhood and his blue balls. He curses a lot. They fuck on his cop car. There is plenty of yelling and nipples to go around.

Back at Jessica v. H-vamp, there has been zero fighting. Jessica asks her charge to drink her blood and she agrees with what seems like far too little reluctance. I thought that blood drinking was supposed to be an intimate and dangerous thing but everyone’s going about it left and right.

In Morocco, Go Fuck Yourself is starving, but declines to snack on a child, the only uninfected blood donor she can find. She presses the kid’s dad for information (pressing being handing him a really huge wad of cash) and finds out that whoever is doing whatever somewhere.

The Sheriff and his vampire (Andy? Or Bill? I don’t know which is which) end up being the ones to locate the nest, a discovery the Sheriff celebrates by vomiting next to the human corpses the vamps have strung up on meat hooks. The vigilantes that witnessed Jason’s emasculation show up at the same time and wave two guns around. They let the Sheriff in on their vendetta, and in a show of good faith give him a handgun to do off with his pesky vampire companion himself. The Sheriff turns on them — obviously — and tells the other gun-toter how awful shooting people is while threatening to shoot him. Guns are lowered. The Sheriff shoos everyone away.

Back at a vampire night club, which was hard for me to focus on because it was basically The Bronze in that alternate universe Buffy episode, we see that the kidnapped humans (from the shindig in the opening scene) are not-so-happy meals being held in the basement. One of them, the token dude, is devoured right in front of them while everyone screams. If I learned anything from Walter Moer’s books, it’s that screaming only excites monsters that eat their prey alive, so stop fucking doing that already.

The Sheriff drops off Andy-or-Bill and idles just long enough to remind him that he still hates him. His daughter, meanwhile, blatantly disregards his orders and invites Jessica into the attic as dawn is dawning since she and her opponent are starting to sizzle. Jessica want to eat her so bad but resists her carnal urges and disappears to the attic without apologizing for almost biting her. The infected bursts into flames on the patio.

The next morning, Sookie shows up at church and everyone, once again, is thinking about her. Tara’s mom gives her the what-for after Sookie puts her hand on her shoulder and Sookie is berated by everyone thinking about what a terrible Slut McWhoreface she is. Sookie snaps, “I can hear you!” and totally guilt cards everyone. She insists that she wants to help.

What to expect next week:

A more informed recap than this that is not in this time slot. Actual analysis based on previous events. Probably more discussion about what Sookie does with her vagina. 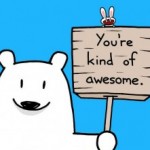 Sort of tangentially related to Slay Belle ig. I like birds and acrobats.

Props for “conveniently ominous.” I now know exactly how to describe how I want my wardrobe to look.

This is amazing. I haven’t seen True Blood in at least three seasons, so this is basically about how I think I would react to watching again.

“Elsewhere, a blonde who I actually don’t know is in Morocco playing Russian Roulette. She says her name is Go Fuck Yourself, which I have absolutely no grounds to dispute.” Love it.